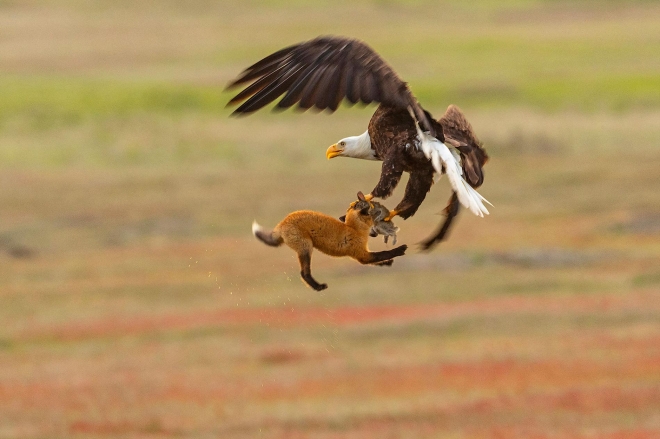 Photographer Kevin Eby was in the National Historical Park of San Juan Island in Washington, USA, to take pictures of foxes that are especially active at this time of year.

At one point, he spotted a fox who caught a rabbit and was about to start eating, when suddenly an eagle appeared that dived from the sky, clawed at the rabbit and climbed into the air. Not only with him, but with the fox.

“I thought that the fox would be scared and let go of its prey,” says Ebi. “But instead she held her for a few seconds.”

Ebi, as a professional photographer, knew that this kind of dramatic scene is a rarity, and when he only heard the sounds of the approaching eagle, he immediately took pictures.

This story is an example of kleptoparasitism, which is often found in the animal world and consists in the forcible appropriation of other people’s food. This is the usual strategy of the bald eagle. That’s why Benjamin Franklin was against this animal when choosing the national symbol of the United States.