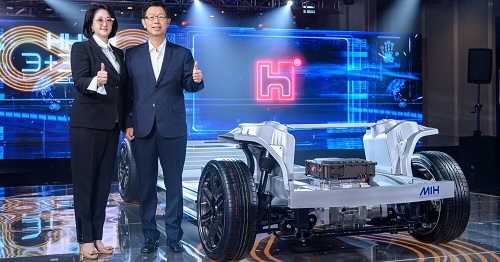 Foxconn, known as the iPhone assembler, intends to become an automaker. She has developed a universal platform for electric vehicles.

Taiwanese tech company Foxconn Technology Group, better known as the iPhone maker, has announced its intention to become an automaker. The firm has already developed and presented its own platform for electric vehicles.

MIH’s open software and hardware platform for electric vehicles, including key component manufacturing technologies, was unveiled at Foxconn Technology Day, which was held for the first time in Taipei at Syntrend Creative Park.

For its MIH platform, Foxconn plans to start serial production of a solid-state battery by 2024, which the company is currently working on. For the production of the platform, the company has made a unique high-intensity material for injection molding, which is distinguished by its strength, high ductility and resistance to corrosion.

Foxconn promises that by 2027, 10% of all electric vehicles in the world will be produced on the MIH platform. At the same time, the company has not yet named a single manufacturer who would agree to cooperate with Foxconn and use its developments in their electric vehicles. Currently, car brands are developing model platforms in-house.