France has opened the first “the solar highway” 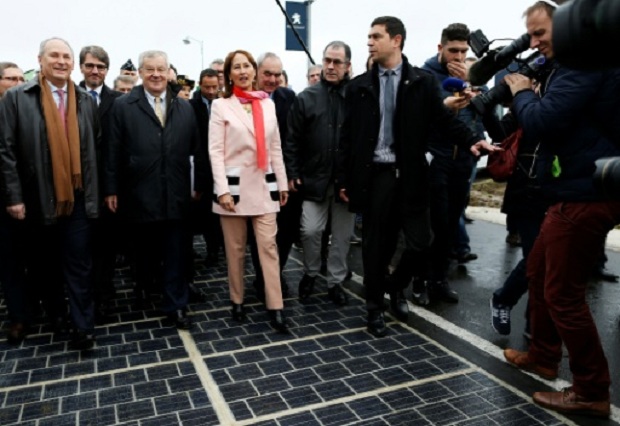 Today in France opened the first “the solar highway”, the road paved by panels of solar batteries. Those give enough energy to light all street fires in the small Norman city of Turuvr.

The highway of one kilometer is paved by 2800 square meters of the solar panels covered with pitch which are connected to local power network.

The Minister of Energy Ségolène Royal announced the four-year-old “plan for national expansion of solar highways” with already going projects in the western Brittany and the southern Marseille.

About 2000 machines use the road to Turuvre every day, checking durability of the panels executed by the French engineering firm “Kola”. The idea which is researched in Germany, the Netherlands and the USA now is that these roads are occupied with cars of only 20% of all time in a year, so, there are huge open spaces which can absorb a solar energy.

Kola says that in the theory France can become energetically independent, having paved only a quarter of one million kilometers of roads solar panels.

Sceptics look meanwhile whether panels under the pressure of time and weather, and also under wheels of heavy trucks will be able to stand. The solar panels established recently in Amsterdam on a 70-meter piece of a bicycle path were damaged last winter, but quickly solved problems.

New roads are called Wattways, and the project already received a government subsidy in the amount of 5 million euros. However, there is one but: solar panels are more effective when they are located at an angle to sunshine as, for example, on steep roofs, but not when lie strictly across.