From under the ice of the Canadian lake, we got a two-meter turtle 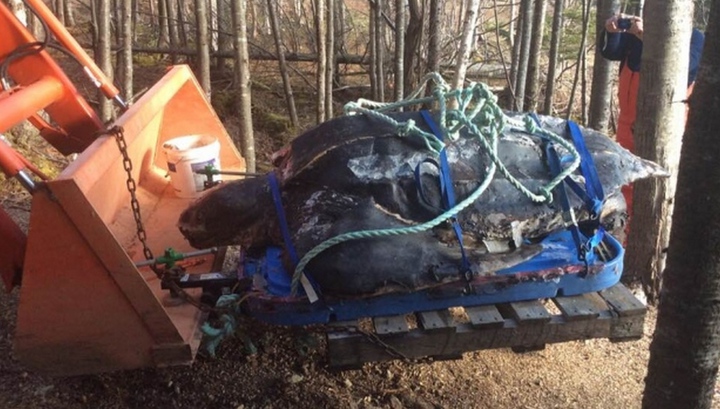 A two-meter-long leatherback tortoise was found frozen in the ice on the Canadian island of Cape Breton, and the amphibian somehow got into the inner lake, where it died. Local resident Sue Macklin took a few photos of an animal whose ancestors had mastered the vastness of the ocean even at the time of the dinosaurs.

Skin turtles annually visit the Atlantic coast of Canada and the Bay of St. Lawrence, but, as a rule, in early October they return to the tropical waters. The more surprising is the find made in the middle of February in Lake Bra-d’Or.

According to the pathologist Laura Brook, a two-meter tortoise weighing almost 300 kilograms died from exhaustion, trapped. Scientists believe that she was carried away by the pursuit of jellyfish – the main source of food – and imperceptibly found herself in the waters of a salt lake, where she could not get out because of the blocked way of ice.

Overcoming up to 12 thousand kilometers per year and able to descend to a depth of up to 1.2 kilometers, leatherback turtles – the largest among the currently living – are endangered in Canada.