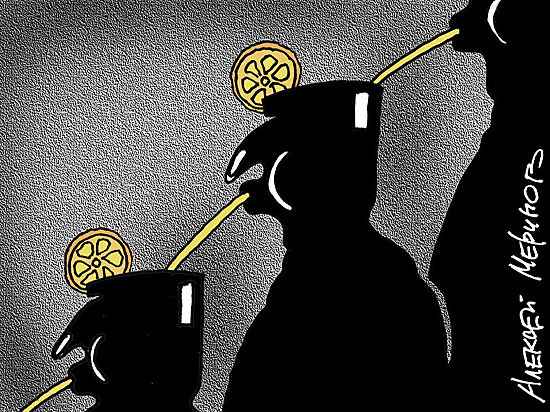 Provide that one fine day all secret will become obvious. All learn who, where when and how many stole what intrigues he spun whom added, locked up or even killed … The terrible wave of a compromising evidence will sweep away many famous politicians. Possibly, also the financial and economic sphere considerably will become bare … And what will be with so significant prospecting structures and intelligence agencies which activities in many respects will lose a meaning? Who needs secret services if there were no secrets?

But there is more to come! Catastrophic consequences of general enlightenment will be sufferred not only by politicians and officials, businessmen and bankers, but also the simplest citizens. At us lie and not only bureaucrats, but also people steal more small who often aren’t lazy to drag from where practically everything that is possible got. If the administration suddenly begins to see clearly, then many of them will lose suddenly work, and even will ring out under court.

Terrible dramas will be played in many families. Each married couple has “skeletons in the cupboard” nearly. The husband, long ago confident in chastity and fidelity of the wife, suddenly learns that she has ten years as there is a lover. And it is possible, and not one … The wife with horror will find out that her husband who as it seemed to her, absolutely lost interest in bed joys in practice is an enthusiast of group sex. Or, it is worse than that, became the bisexual and established intimate relationships with men …

Millions of families will be scattered as houses of cards. Will arrive works to psychiatrists and criminalists (though many of them also will appear among victims). Quite perhaps, the unprecedented wave of murders and suicides because of jealousy will follow.

Such fantastic succession of events can become real already in the near future and it will appear it is similar to what it is accepted to call the Apocalypse. Wrong idea of it as about awful catastrophic crash like earthquake or a nuclear warfare is widespread. But in translation from Greek the Apocalypse is “opening, removal of a cover, exposure”. That is general enlightenment. This change in history of mankind is predicted by many famous oracles, and not just only Jesus Christ who in due time promised that “all secret will become obvious”. But what image and what miracle there will be this Great Enlightenment?

It is known that a row of inhabitants of our planet — for example, dolphins and ants — communicate at the telepathic level. Some scientists believe that once and people could read each other mind easily. The researcher of ancient civilizations Igor Manokhin reads that with development the ekstrasensornykh of abilities telepathic communication between people can be reestablished though when and under the influence of what specific factors while it is unknown.

But it is precisely known that in the next years the mankind will have purely technical capabilities for universal enlightenment and opening of a lie. The authoritative American University of Singularity created by NASA and Google published recently “Predictions to mankind the next 20 years”. His experts promise an improbable saltus in development of an artificial intelligence and biotechnologies. They also claim that “till 2020 there will be applications able to recognize the truth and a lie”. Moreover, it is quite probable that in five-seven years such mini-lie detectors will begin to enter standard feature set of many smartphones.

It was much simpler to hide the truth hundred years ago. Let’s tell, military could arrange terrible slaughter which it was possible to become silent. At best the message about atrocities reached the general public several months later, and at times even years. And therefore an opportunity to interfere and counteract was practically not. Now we have absolutely other pattern. Thanks to the Internet and television of patterns learns about similar and other events almost instantaneous. And it in many respects helps to fight against the evil.

About ten years ago politicians and military couldn’t provide that thousands of pages of confidential materials can be published together with their direct private talks. Now such leaks became common business. Yes, the human factor plays an important role here, but not decisive! It is possible to admire Edward Snowden or Julian Assange’s courage who laid the foundation for Great Enlightenment. But it is necessary to understand that the revelations which shook the world couldn’t appear 20-30 years ago when for this purpose there were no purely technical capabilities yet. Apparently, exactly thanks to scientific and technical progress of patterns will become more and more transparent. This trend will remain, and to mankind many secrets will be revealed.

Now the lie penetrates all spheres of our life, beginning from policy and finishing the relations in a family. Mankind in general and each country separately will make grandiose breakthrough in the development as soon as people cease to lie and steal. But so far don’t dream of it neither in Russia, nor in Ukraine where no maidans help to win against corruption. Perhaps, depth of immersion of these countries in a foul place of a lie and theft paradoxically will force them to become leaders of changes. Because the heavier and nesterpimy fetters, the more there is a wish to get rid of them! The more dirt, the more there is a wish for purity! In due time one famous, but not really fair Russian oligarch declared: “The first country which will enter at itself even the minimum financial transparency during one generation will get into world leaders”.

Many prophets, including Nostradamus and Vanga, predicted receipt of “Golden Age” and emergence of new, more fair society at the beginning of the third millennium. Radical change of interior can’t but act as its condition. Christ spoke to Pharisees: “Bozhiye’s kingdom in you is”. If we change the human qualities, we will cease to lie, steal, we will begin to love each other, then we will open the Kingdom of God in ourselves.

However transition of mankind to “Golden Age” will happen only after great shocks in policy and economy. Politicians will lose an opportunity to play the hypocrite and fool the people. Money won’t be able undividedly to rule the world any more. To business partners all cards will open. Bankers and entrepreneurs necessarily should play fair. The concept of intellectual property will become outdated, without having managed to affirm. Sweeping changes expect also the family sphere in which we most often declare one rules, and we live absolutely on others. Absolute fidelity for a long time not the rule, but exception. However it becomes more difficult to dissemble and lie. Already now many spouses have an opportunity to monitor movements of each other by means of the mobile phone. When in smartphones there are lie determinants, will begin to flirt on the party impracticablly.

Of course, it is unlikely it will force all to become chaste, but necessarily it is necessary to look for new, more open and honest forms of cohabitation. Perhaps, we will return to the family units and group families existing during a matriarchy era. Or we will use experience of svinger who have already refused a lie “for decencies”. Surprisingly, but the researches conducted in the USA have shown that “the naked truth” assists in the family relations to marriage strengthening. Especially those families which were on the verge of disintegration and who have nothing to lose. Open and honest even if also indecent (from the point of view of strict morals), the movement of svinger becomes now more and more popular in many countries including in Russia. Indirectly it demonstrates that Great Enlightenment has begun also in family life. People don’t want to live in a lie even if neglecting traditional morals.

In the next years the world is waited by tectonic shifts and enormous changes practically in all spheres. And the main council to all who want to live up to approach of “Golden Age” can consist only in one: get rid of “skeletons in the cupboard” and try to play fair everywhere and in everything already now.