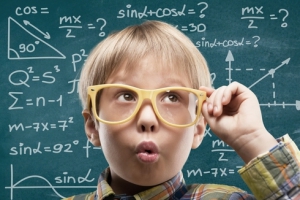 Points are an indicator of high intelligence – this is perhaps one of the most common stereotypes in the world. And it’s also true.

A team of geneticists from the University of Edinburgh found out that people who wear glasses do have a higher level of intelligence than those who do not need them.

However, the statement is true for people wearing contact lenses. And it’s not about the availability or lack of an accessory in itself, but a little in another.

In the course of large-scale work, the researchers found that some health indicators, including visual acuity, are associated with cognitive functions. Among them, recall, include mental performance, the ability to remember and store information and so on.

Specialists used data from more than 300 thousand people from Europe, North America and Australia. They turned to the UK Biobank database, and also used the results of mass surveys within the framework of the projects CHARGE and COGENT.

For the meta-analysis, the authors collected the medical and genetic data of people aged 16 to 102 years. In addition, all participants underwent special surveys and tests to determine the level of intelligence and cognitive abilities.

As a result, researchers identified 148 genome regions associated with common cognitive functions, and 58 genomic sites (sections of DNA molecules) previously scientists did not correlate with the development of intelligence.

Also, 42 genomic loci associated with the reaction rate were found, 40 of which were not studied.

At the same time, statistical calculations showed that people with a higher IQ score are 32% more likely to suffer from myopia, and visual impairment was genetically determined. In 28% of cases, these participants wore glasses or contact lenses.

Curious and that’s it. Studying a number of other indicators of volunteer health, experts noted that people with higher intelligence reduced the risk of developing hypertension, angina pectoris, osteoarthritis, and lung cancer. In addition, they are 30% less likely to suffer from depression and other mental disorders, and their life expectancy is on average 17% higher than people who have not been so prominent in cognitive functions.

Thus, scientists have confirmed one stereotype and debunked another, because many believe that “clever” often have weak health.

“This largest study of cognitive functions has revealed many genetic differences that contribute to the transfer of mental ability by inheritance,” said co-author Gail Davies.

According to her, the discovery of new “genetic effects” in relation to health and cognitive abilities sets a new direction for work. Now scientists have to study the mechanisms responsible for the development of thinking abilities throughout the life of a person. Perhaps new data will be useful in studies devoted to the reduction of cognitive functions in old age.

More details about this study are described in an article published in the journal Nature Communications.