Geologists discovered the last secret of the Bloody Falls 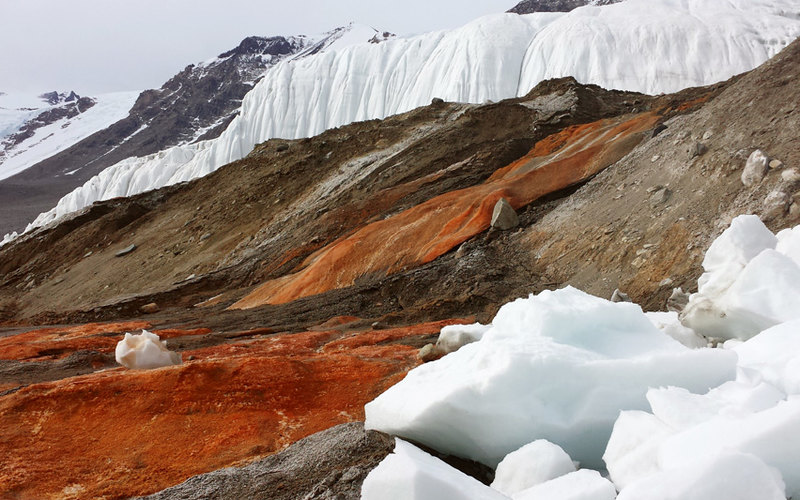 Like many other unusual natural phenomena, the Bloody waterfall in Antarctica was fraught with many mysteries over which geologists around the world racked their brains.

A bloody waterfall is a stream of meltwater that spills out of the Taylor Glacier in the Dry McMurdo Valleys in East Antarctica. For a long time after its discovery in 1911, researchers assumed that the water color is colored red algae, but later it was proved that in fact the waterfall “feeds” the flow of brine, located under the ice. The salt water is overflowed with iron, which, when in contact with air, oxidizes and turns red, creating a “bloody” effect.

Last year, researchers reported that they were able to find saline groundwater under the Taylor Glacier – they suggested that this was the source of the Bloody Waterfall.

In addition to the fact that the meltwater of bloody color is a strange phenomenon in itself, the researchers also found that brine – water, which is a saturated saline solution – remains liquid, although Taylor is a cold glacier: it freezes to the very bottom, and its temperature The ice is much lower than 0 degrees. And a new survey of geologists from the University of Alaska is finally revealing the last secret of the Blood Glacier: why does the salt solution remain liquid under the ice? ..

When freezing, water releases heat, so the solution does not freeze, says glaciologist Erin Pettit. To turn into ice, saline solution needs much lower temperatures than fresh water, and the generated heat of brine is sufficient to remain in the liquid state. Pettit and her colleagues also found that brine “extends” almost 5 kilometers from the end of the glacier.

By the way, brine is also a habitat for microbes, which are of particular interest to astrobiologists: the researchers believe that once on Mars such extra-saline groundwater could exist.