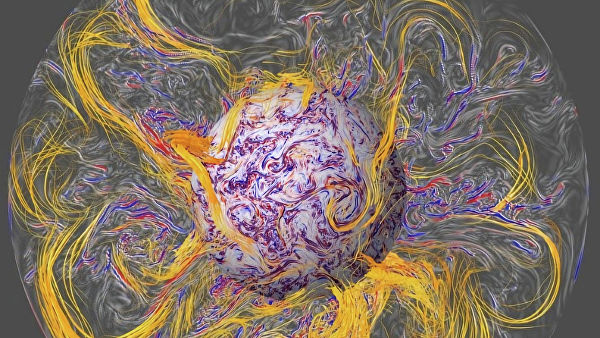 The strength of the Earth’s magnetic field changes dramatically every ten years due to the existence of special turbulent waves inside the core of the planet, “churning” its matter when reaching the boundary with the mantle. French and Danish geologists write about this in Nature Geoscience magazine.

“The Earth’s magnetic field is not permanent, its force is influenced by both slow and fast oscillations. For example, the slow circulation of molten rocks in the core not only generates this field, but is also responsible for oscillations in its force that last for centuries. and very sharp fluctuations, the so-called geomagnetic jerks, whose duration does not exceed a year, “write scientists.

The core of our planet, as scientists believe today, consists of two layers – a solid metal core in the center, and a layer of liquid iron and nickel surrounding it. This metal “liquid” does not stand still, but constantly moves like water in a boiling kettle, and this movement generates a magnetic field that protects life on Earth from cosmic rays, flares on the Sun and other dangerous cosmic phenomena.

Nobody knows today how this movement takes place, since it is virtually impossible to look into the core of the Earth using seismic instruments, because of which scientists have to learn its secrets using mathematical models and laboratory experiments on reproducing conditions in the core using superpower presses and anvils.

Recently, scientists have discovered that the core of the Earth is extremely heterogeneous in its structure, which made them suspect that there are not two, but three layers inside it. Two more groups of geologists discovered unusual “bubbles” of iron, which rise from the core into the mantle, and also found traces of the existence of peculiar “reactive streams” of iron inside it.

Julien Obert from the Institute of Physics of the Earth in Paris (France) and his colleague Christopher Finlay from the Technical University of Denmark in Lyngby studied another strange feature of the Earth’s core, discovered at the end of the last century.

Until that time, scientists believed that the magnetic field of the planet weakened or strengthened at a fairly slow pace, almost imperceptible to our devices. In 1978, the situation changed dramatically when the first accurate geomagnetic instruments recorded that the rate of these changes increased by several orders of magnitude. About a year later, this “jerk” stopped and the magnetic field returned to normal, but something similar happened again in the next decade.

In total, over the past half century, scientists have recorded ten such events, the nature of which, like their impact on field strength and pole migration, is still the subject of controversy among geologists.

Finlay and Aubert found an explanation for their occurrence by studying the data recorded during the last three geomagnetic jerks that occurred in 2007, 2011 and 2014, and analyzing the findings of their recent attempts to explain how the poles of the Earth are being turned.

The Earth’s lithosphere consists of three main layers – the crust, mantle and core. As part of the mantle, scientists distinguish two parts – the upper and lower. The study of the core and layers of the mantle “directly” is impossible in practice because of the great depth at which their rocks lie.

Then scientists suggested that periodic temporary or permanent changes of the poles of the planet were associated with the existence of special oscillations inside it, the so-called “dynamo-waves”. They move from the equator to the poles and rebuild the magnetic structure of the nucleus with a certain periodicity.

Something similar, as geophysicists have noticed, occurs at the moment of the appearance of “geomagnetic jerks”. Most of all, they manifest themselves in the vicinity of the equator of the planet, where there are zones in which the strength of the magnetic field is particularly strong or falling. This prompted them to the idea that such anomalies can generate some kind of deep waves inside the core, due to the fact that the Earth rotates around its axis.

Guided by this idea, the scientists created a very detailed computer model of its matter, with the help of which they calculated how such oscillations would arise and move. To carry out these calculations, Ober and Finlay needed a powerful supercomputer and 4 million hours of computer time, but these costs paid off.

It turned out that geomagnetic jerks appeared in such a system by themselves due to the fact that the waves appearing in the central regions of the core gradually slowed down and increased as they approached its boundary with the mantle. When they reached this zone, these oscillations in a special way “stirred up” its matter, which led to a sharp increase or weakening of the magnetic field.

As scientists hope, the results of their calculations and the computer model will help to establish precisely the role that geomagnetic jerks play in the evolution of the Earth’s magnetic field and in the revolution of its poles.