Geologists have found out why a volcano in Bali woke up 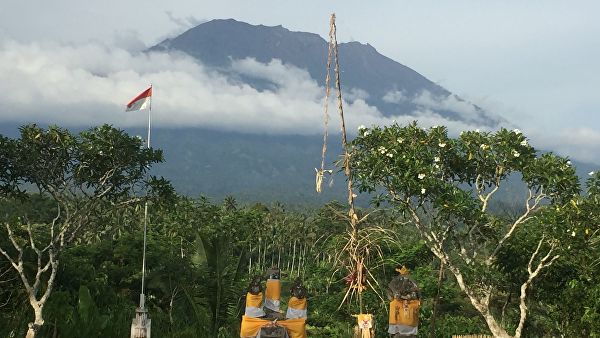 Satellite images of the surroundings of the volcano Agung in Bali helped British geologists understand why he suddenly woke up in 2017 and continues to show signs of activity today. Their findings were presented in the journal Nature Communications.

“We noticed that the source of earthquakes in Bali, and the epicenter of all rock deformations was about five kilometers from the volcano’s mouth. This meant that the magma was moving in its direction not only vertically upwards, but also from the side. In other words, we found that Agung and Batur volcanoes can be connected with each other, “said Fabien Albino of the University of Bristol (Great Britain).

Volcano Agung – one of the largest layered volcanoes in the tropical part of Asia. It is known for its infrequent, but very powerful eruptions. The last time Agung “woke up” in 1963, and at that time its emissions killed the lives of about a thousand inhabitants and tourists in Bali, as well as a series of abrupt climate changes.

In September 2017, seismologists recorded a series of aftershocks around the volcano. They were the first serious evidence that he began to wake up, and that his new eruption could occur in the coming months and years. This led to the evacuation of about 100 thousand people living on the slopes of Agung, and forced scientists to begin new estimates of the consequences of its eruption.

According to climatologists, the powerful eruption of Agung can “slow down” global warming for about 5 years and temporarily cause a slight cooling. It is not yet clear whether the situation will develop according to a similar scenario, but scientists, as noted by Gavin Schmidt, director of the NASA Goddard Space Research Institute, are closely monitoring the situation in Bali.

Geologists, Albino notes, were worried about a slightly different question – why Agung suddenly woke up and whether this awakening would have any more serious consequences than periodic emissions of ash, gases and small amounts of lava.

To search for answers to this question, scientists used one common feature for all volcanoes. The fact is that under each volcano there is a magmatic chamber – a reservoir of porous rocks that can absorb large amounts of liquid magma.

Before the eruption, this chamber overflows, which leads to its expansion and raising the height of the area in the vicinity of the volcano. By the way the chamber has “swelled up”, scientists can estimate the volume of magma contained in it, understand where it came from and calculate the approximate strength of the cataclysm.

The process of filling this chamber usually proceeds in “jerks” rather than at a constant speed. As a result, the pressure inside the magma chamber periodically changes dramatically, and these changes generate relatively weak and long-period seismic waves moving toward the surface. Man does not feel these tremors, but seismological instruments record them at many active volcanoes.

Guided by these ideas, Albino and his colleagues collected satellite photographs of the Agunga environs, obtained by the Sentinel-1 probe before and after the awakening of the volcano, and data from land seismic stations. Combining this information, they calculated the position of the “epicenter” of underground activity.

To their surprise, he was not in the vicinity of the Agung venge, but at a point located on its northeastern slopes, about half way between him and another volcano, Mount Batur.

Such an arrangement of this point, as shown by the calculations of Albino and his colleagues, is possible only if Agung and Batur are united by a common system of underground channels through which lava can move between their igneous chambers, coming from a common source of magma located at a depth of 10 -30 kilometers.

This is supported by the fact that the second volcano had already woken up in 2000 and showed signs of activity in the following years. In addition, an analysis of eruption statistics in past decades and centuries shows that Batur and Agung are erupting together or alternately. This should be taken into account in the future to protect the people of Bali from the possible consequences of these disasters, conclude Albino and his colleagues.