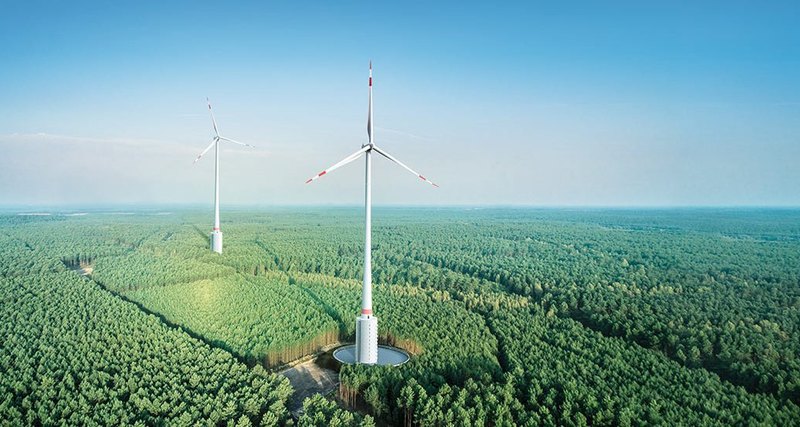 Germany, more than any other country, promotes wind power stations as a source of energy for the future. This country ranks third in the world, after the US and China, in the total generation of electricity by wind, and this bar is growing every year. Recently, German engineers decided to break the world record and built the highest wind turbine on our planet.

The facility is located in the city of Heidorf and reaches an impressive height of 246.6 meters from the base to the tip of the turbine blade. Three other turbines, also part of this installation, are also incredibly high: the height of the smallest is about 152 meters.

For wind power plants, altitude is the main parameter. The higher the turbine is located, the higher the wind speed and the more stable it blows, which leads to an increase in the energy received and to a smaller number of periodic power depletion. According to calculations, the capacity of four new turbines will be enough to provide electricity to 1000 houses.

And if you are not only that these turbines are simply the highest on the Earth, they have one more interesting feature – a new technology of energy storage. Rather, the technology itself is old, but the Germans greatly ennobled it. Each of the windmills has a reservoir of water built in the base, and at the time of generation of surplus energy, water is pumped from the reservoir to the storage. As soon as the power falls – the water comes back and rotates the additional turbines, thereby increasing the production of electricity. Thus, engineers solve one of the biggest problems associated with renewable energy sources – their irregularity and the dependence of power on climatic features.