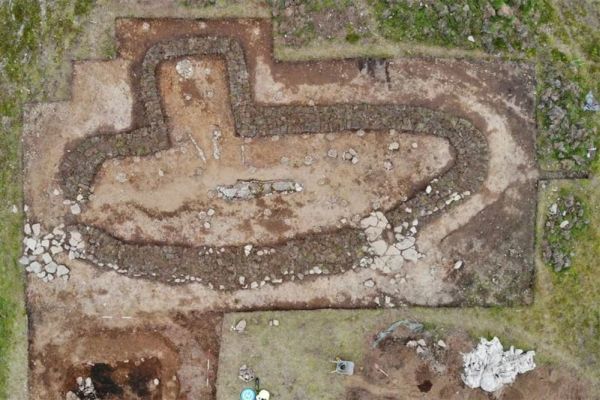 Icelandic archaeologists, while excavating in the village of Arnarfjordur, discovered a very long medieval house, probably one of those described in the saga of the settlement of this island.

The opening was reported by the local news agency RUV. Back in 2013, archaeologists discovered a caked and very old ash heap that pointed to the possible location of an ancient farm. Due to problems with funding, excavations began only in 2017. They are held in Arnarfjordur, near the church town of Augkula.

The archaeologists were right – the ash found earlier led to the discovery of a 10th century farm settlement. Only this year, researchers managed to unearth an entire earthen house, in which a large furnace with cracked stones was found. A hut 23 meters long was discovered nearby – it was an extremely long residential structure for that time period.

Inside the hut, a long hearth was discovered, made in the traditional Icelandic style. It looks like it was a very large farm, as during excavations nearby a smithy, a workshop, a cowshed and three more modest residential buildings were found. However, archaeologists suggest that this could also be a small settlement in which miners lived – there is an iron mine nearby.

According to Ancient Origins, the finds were literally based on the study of the ancient sagas. One of them called “Landnamabok” was written in the first half of the 12th century. It is the oldest written record ever discovered, detailing the settlement of Iceland.

This epic is a list of the first Icelandic inhabitants by name. It includes 3000 names of people and 1400 place names. “Landnamabok” assures that the first settler in the town of Svinadalur was a certain Eyvindur Audkula. And around 1300 AD, a certain Kolbein Bjarnason Auchilingur became a local jarl, that is, a count. Studying these ancient records, archaeologists gradually came to the conclusion that the structures they excavated could well have been the settlement of the early 10th century, mentioned in the saga.