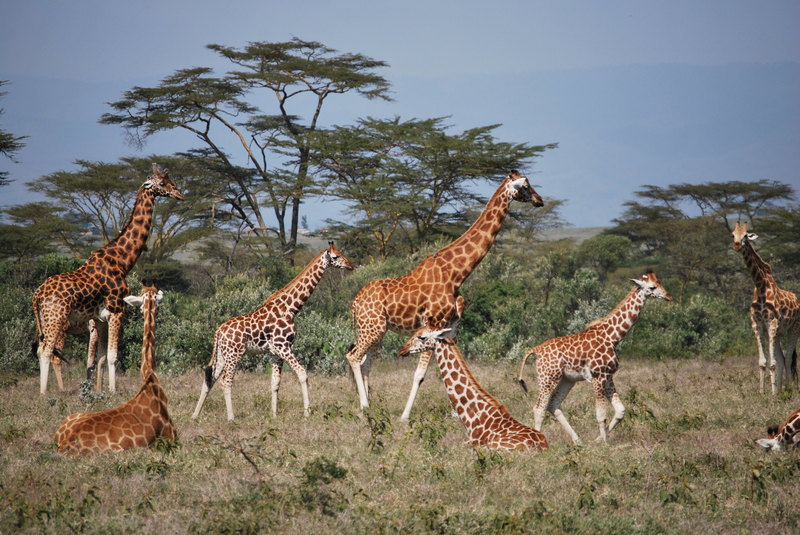 A new study, conducted by biologists from the University of Bristol, again indicated how little we know about the behavior and ecology of giraffes.

It is generally accepted that the size of groups of animals increases with the increase in the number of predators. This is due to the fact that in larger groups the risk of death of individual individuals is somewhat lower, and animals can more effectively monitor the approach of potentially dangerous predators.

Now, in a new study conducted by experts from the University of Bristol (UK), it was shown that the number of predators does not affect the size of groups of giraffes. “It’s amazing and demonstrates how little we know even about the most basic aspects of giraffe’s behavior,” says Zoe Muller, the lead author of this work.

Researchers studied two neighboring populations of Rothschild giraffes (Giraffa camelopardalis rothschildi), the rarest subspecies of giraffes inhabiting Kenya. Experts took into account a number of factors that could influence the size of groups of animals. One population, as noted, was not exposed to any risk from predators; the other lived in a territory where lions lived in large numbers.

Among the factors that could influence the size of the groups were, in particular, the presence of predators, the type of habitat, the characteristics of individual individuals. The study showed that the type of habitat exerted some influence, but the main factor was apparently the behavior of adult giraffe females – they found themselves in smaller groups when they had cubs (more precisely, the size of the groups, as the authors say, was “artificially” influenced the number of cubs, and when they were statistically “removed” from the analysis, it turned out that in reality females with cubs form smaller groups). This, as noted, runs counter to the past opinion, according to which adult female individuals, caring for the young, try to form groups of large sizes: the study suggests that everything is just the opposite.

“We concluded that predators are not an important factor for the grouping of giraffes,” the authors of the work reported. At the same time, scientists note that in order to better understand the complex behavior and the ecology of this insufficiently well-studied species, more research is needed.