Giraffes — this is not one, but four 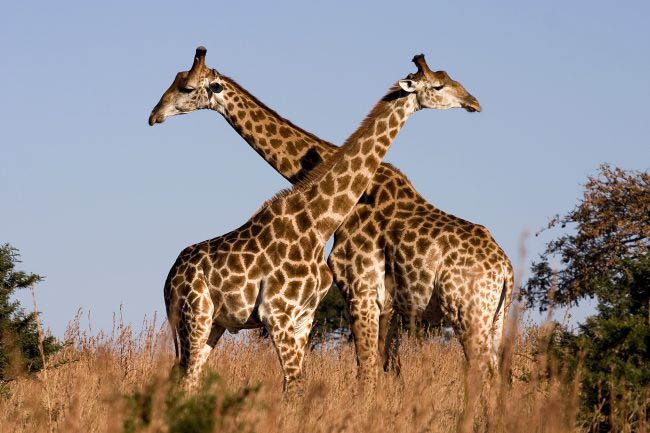 One of the most interesting animals in Africa a secret. Genetic analysis showed that the giraffe is not one, but four different.

Such a conclusion could radically change the approach of the defenders of the natural resources to these animals. Previously, scientists were divided giraffes into several subtypes based on their color and habitat. However, closer inspection of their genes showed that giraffes actually have to be divided into four separate pedigrees, which do not interbreed in the wild. This researchers reported September 8 in a paper published in Current Biology. Previous genetic studies showed that indeed there are discrete populations of giraffes, which are rarely in contact, but for the first time, the study revealed differences at the species level, says Axel Janke, a geneticist at the University of Goethe in Frankfurt, Germany, senior author of the study.

“This is an amazing discovery,” he says and adds that giraffes are very movable, common animals who have had a lot of chances to interbreed in the wild, if wanted. “The million-dollar question: what separated them in the past.” Jahnke suggests that rivers or other physical barriers could keep the types separated long enough to have new.

The study investigated the distribution of 7 specific genetic sequences is selected to allow scientists to measure genetic diversity in nuclear DNA from skin biopsy 190 giraffes. They also studied the mitochondrial DNA of animals. The sequence can be divided into four different models that strongly differentiate separate species. Jahnke says that each of the four types of giraffe is different, like the brown bear (Ursus arctos) from the polar bear (Ursus maritimus).

“This study is pretty compelling,” says George Amato, a conservation biologist from the American Museum of natural history in new York, which conducts extensive research of the genetics of African wildlife. “I welcome him and what it adds to our understanding of African biogeography”.

Jahnke says that these findings have clear implications for the conservation of the species: all species of giraffes must be protected, special attention should be paid to the Northern and reticulated giraffe. Each of these types includes less than 10 000 individuals. According to the Foundation for the conservation of giraffes, the total number of giraffes has declined from over 140,000 in the late 1990s to less than 80 000 today, mostly due to hunting and loss of habitat.

However, applying the new results directly to the conservation efforts can be difficult. “At the moment we still do not fully understand the power of genomics in conservation,” says Aaron Shafer, a geneticist at the University of Trent in Peterborough, Canada. Genetics may open up new types, but it is not always clear that these discoveries can help us in the protection of animals.

Amato notes the strong Parallels between giraffes and African elephants, which are classified as a single species, while the 2010 study did not provide the genetic evidence that there were actually two: forest elephants (Loxodonta cyclotis) and savanna elephants (Loxodonta africana). This discovery has increased the number of calls for the protection of forest elephants, which were smaller.

However, the international Union for conservation of nature considers two kinds of elephants in the single, for fear that the division will hang in an indefinite state hybrids of forest and Savannah elephants. And factual data showing that many populations of American bison (Bison bison) include a small amount of DNA from domestic cattle has caused concern about whether it is worth to save a half-breed herds, because they are not completely wild. Amato and other biologists argue that animals need protection, because you remain ecologically functional bison.

It is unclear whether the latest study any impact on the conservation of giraffes. The most immediate effect may manifest in the zoos that trade mammals for breeding purposes: now that researchers have identified some species, the workers of the zoo will be easier to find matching pair.

Detection of individual species of giraffes could happen sooner, but science has deprived these animals attention. They were quite widespread in their environment and didn’t care for poachers. They were treated as something taken for granted.