Glacier melted in the Alps reveals a perfect mummy 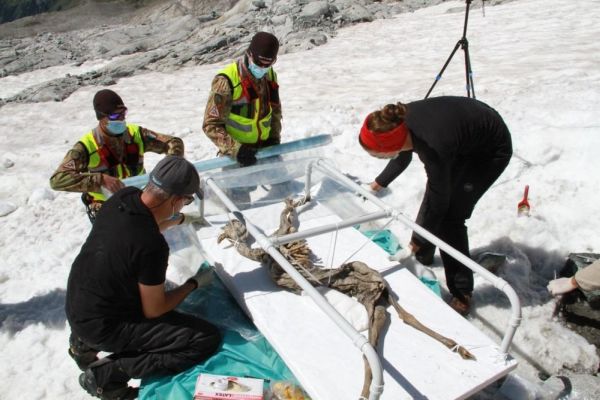 The Alpine Army Corps in Italy helped scientists transport a 400-year-old chamois ice mummy from the highlands, which was accidentally found by a climber during his trek. This discovery was made due to the fact that the glacier that hid the mummy for centuries melted.

According to Phys.org, the remains of the animal were found near the Italian town of Val Aurina. They have already been delivered to the laboratory, where experts from the Eurac Research Institute for the Study of Mummies have begun to analyze it. One of their challenges is to improve conservation practices for mummies around the world.

The mummy belonged to a chamois that died about 400 years ago. It was accidentally discovered by climber Hermann Oberlechner. And at first he saw nothing unusual in this. Climbers often come across the remains of wild animals during their “excursions”.

And only after carefully examining the ice mummy, he realized that he was faced with a unique discovery. He informed the ranger about the find, and he turned to the experts. The uniqueness of the find lies in the excellent preservation of the carcass. For several centuries, the glacier carefully protected it from the process of decomposition. But nowadays it has melted, revealing the animal.

“In mummified samples, DNA is often degraded and only present in minimal amounts,” the release explains. “In fact, the first question that experts usually face is how to investigate a mummy while continuing to preserve it without damaging its ancient DNA. has irreversible consequences for DNA fragments, making it impossible to experiment with new methods when finding human mummies. ”

In this regard, the found intact animal mummy proved to be an ideal teaching tool. In addition, the conditions of its storage were probably identical to those under which the ice mummies of man were kept. The most famous of these is the mummy of Oetzi, an ice man also found in the Alps.

“Through our previous research, we know the optimal physical and chemical parameters for conservation from a microbiological point of view,” explains Marco Samadelli, environmental expert at Eurac Research. “In the laboratory, we will place chamois in these conditions and focus on their effect on DNA. “Through repeated in-depth analysis, we will check what changes DNA undergoes when external conditions change.”