Global warming by half will reduce fish catches 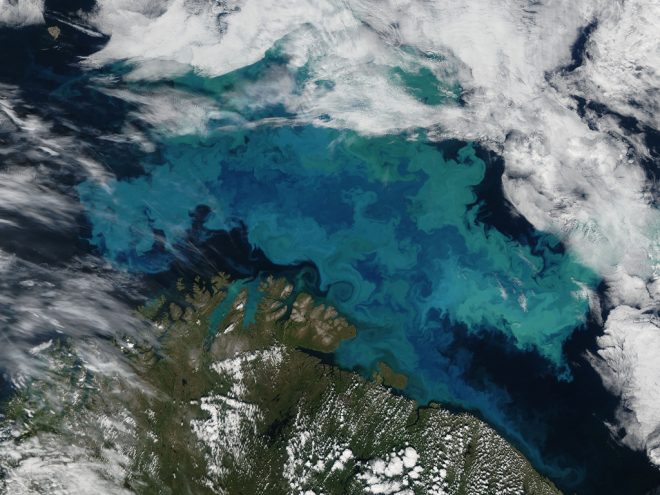 Phytoplankton is the basis of life in the ocean — it gives you energy, which supports the existence of almost all marine species. The volume of phytoplankton in a certain area of the ocean today often determine the approximate number of fish that you can catch. But a new study in the framework of the “Nereus”, which focuses on forecasting the future of the ocean, demonstrated that this seemingly obvious relationship is not so simple.

“We know that these two quantities should be linked, but there are several steps in the food chain that complicate the conversion process of growth of phytoplankton in fish growth”, — quoted one of the authors of the program Ryan Rakauski, associate Professor, University of South Carolina, portal Phys.org.

The authors of the study, the results of which were published recently in the journal PNAS, used mathematical model to study the processes of energy transfer from the beginning of the food chain to fish. Found significant regional differences in fish catches. According to the authors, they have been conditioned by how effectively the communication channels benthic ecosystems — sources of energy — with the ecosystem of the ocean surface.

The study’s lead author Charles Runoff from geophysical gas dynamics laboratory at Nezapravlenny oceanic and atmospheric administration and the lead researcher of the program “Nereus” emphasizes the important role of coastal systems in the process. According to him, a large number of nutrients vital to the growth of phytoplankton, rise from the deep ocean due to underwater currents. Thus, the noted oceanographer, coastal systems “contribute to global fisheries that far exceeds the contribution that would be expected from the mere phytoplankton”.

The results of this study allow us to better predict the potential catch in different ecosystems and to understand how climate change, particularly global warming, will affect fishing.

As experts explain, phytoplankton requires light, which it receives on the surface of the ocean, equally as nutrients, in large quantities accumulate in deep waters. Only the combination of these two factors allows the phytoplankton to grow and produce energy needed to support fisheries.

Heating the surface of the ocean, caused by climate change on the planet, contributes to the stratification of the ocean is a clear separation of deep and superficial waters. Scientists claim that the consequences will be particularly felt in low and middle latitudes. They estimate that even a moderate decrease in growth of phytoplankton (up to 15 %) in these areas can lead to significant decrease in volumes caught fish — more than 50 %.

Co-author of the study Rebecca Ash, associate Professor East Carolina University, emphasizes that it is impossible to neglect the impact of global warming on the first rung of the oceanic food chain.

“Climate change will have a significantly greater impact on species that are in the food chain were above the phytoplankton, including fish. This is very important because it including those species from which we, the people, depends on the protein source,” says the scientist.

The study authors note that currently the countries leading active fishing activities, need to develop clear strategies for fisheries based on ecosystem approach. Scientists insist on changing policy approaches to addressing the issue of impact of climate change on fisheries and increased restrictions in this area.