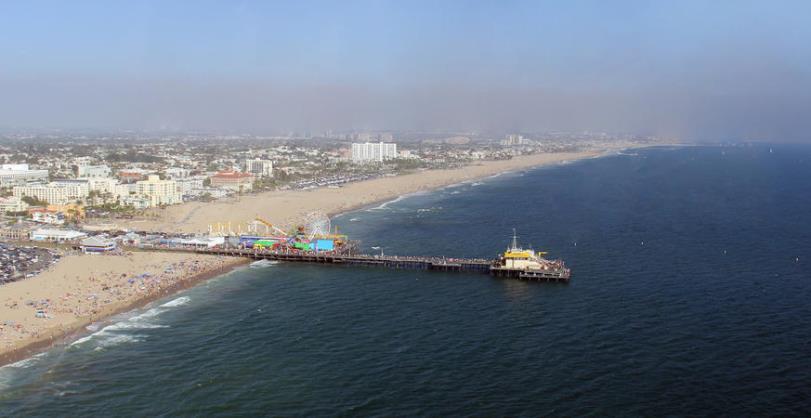 Climate change leads to an increase in ocean temperature, but land temperature is growing even faster, and this leads to a deterioration in air quality throughout the world – these are the results of a study done at the University of California.

The study was published Feb. 4 in Nature Climate Change. It showed that the difference in the degree of heating of land and sea increases the concentration of aerosols in the atmosphere, and this leads to an increase in air pollution.

Aerosols are tiny solid particles and microscopic droplets floating in the atmosphere. They can be formed naturally with dust or smoke from fires, as well as from sources created by human hands, such as transport and industry. Aerosols affect the climate, including interfering with the water cycle in nature, as well as on human health. They lead to the appearance of smog, which has a detrimental effect on people, animals and plants.

“Due to the increase in the concentration of greenhouse gases in the atmosphere, the land temperature will rise faster than the ocean temperature. This warming also leads to an increase in aridity on the continents, ”explains the author Robert Allen, a professor of earth sciences.

Increased aridity leads to a reduction in the lower layer of clouds and, as a result, a decrease in precipitation – the main way to eliminate aerosols from the atmosphere.

To establish this, the researchers modeled climate change in two scenarios. In the first, the usual model of warming was adopted, when the temperature rises constantly. In the second scenario, the land heated less.

In the scenario with normal warming, a stronger warming on the continents increases the aridity, as a result of which the concentration of aerosols increases, and hence the air pollution. But the second scenario, with less heating of land, leads to a decrease in the aridity of the continents and less pollution of the atmosphere. Thus, increased air pollution is a direct consequence of the greater heating of land and its dehydration.

As a result, it turns out that the hotter the planet’s climate becomes, the more difficult it will be to keep air pollution within certain limits without serious control over aerosol sources.

As the researchers tried to find out how greenhouse gas affects air pollution, they assumed the constancy of the amount of anthropogenic aerosols entering the atmosphere.

“This is probably not the case, as people seek to reduce air pollution, including emissions of anthropogenic aerosols,” the professor warns. Allen. – So the result shows the upper limit. ”

But it also means that with further climate warming, improving air quality will require a more substantial reduction in anthropogenic aerosol emissions.

“The question is what level of air cleanliness will be set as acceptable,” said Allen. “Even with the strongest environmental laws in the United States, California’s air quality is relatively low, and in many countries even worse.”

If you do not reduce anthropogenic emissions into the atmosphere, then a warmer climate will entail even greater air pollution from aerosols.