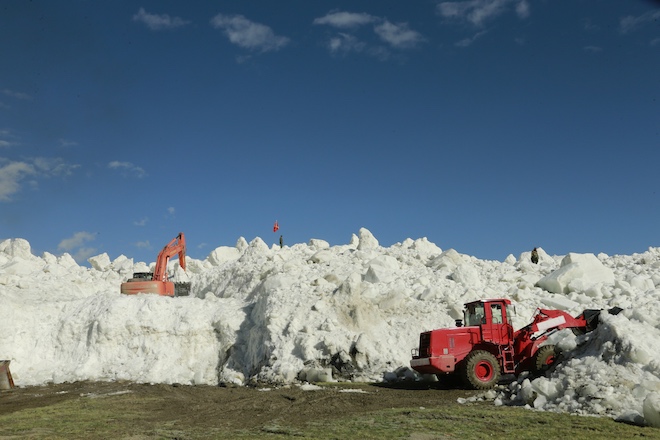 Glaciers of the western Tibet were stable for thousands of years. But several months ago two huge ice avalanches which descended from the plateau forever changed a customary landscape. As show researches, probably global warming is the reason of unprecedented icefalls, and in process of climate change similar disasters can happen in the region even more often.

This summer, on July 17, from a glacier Ara more than 60 million cubic meters of ice and rocks were slivered that is equivalent to the volume of 24 000 Olympic pools. In a few minutes the descended avalanche covered about 10 square kilometers of the valley, having killed nine shepherds together with hundreds of sheep and yaks.

Satellite images give an idea of catastrophe scales.

This picture of NASA shows highlands Ara till the avalanche. 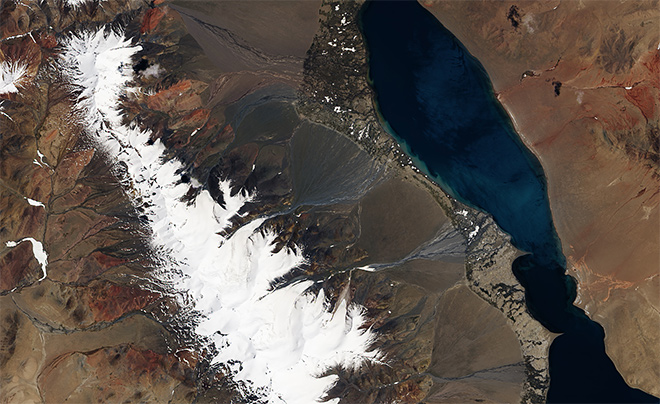 In this picture glacier collapse consequences are visible. 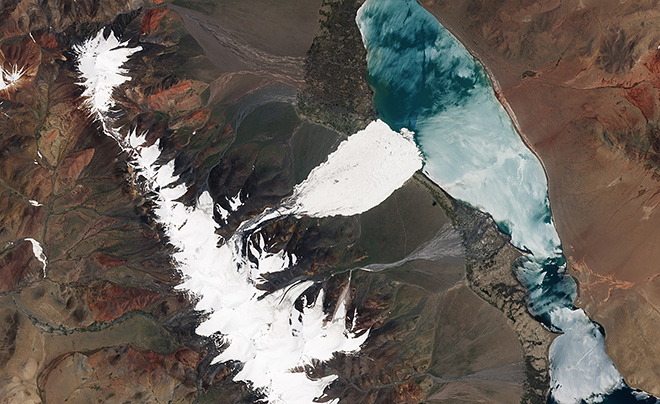 So large glacial collapses happen extremely seldom. A July incident in Tibet became second-large an ice avalanche which concedes only to the glacier the Splitting which descended in the Caucasus in 2002.
The western Tibet long time was read by stable glacial area. Unlike the Southern and East Tibet where glaciers thawed in high gear, this region seemed rather steady against temperature increase.

However in two months there was the second, at least scale collapse of an adjacent glacier in the same mountain circuit. This time unwinding of a large avalanche did without the victims, but its appearance shocked scientists and locals. “One such event is already surprising; two in a row — an unprecedented case” — were written geophysics by Dave Petli in the blog in October. According to the scientist, responsible for two icefalls is climate change. According to “The Guardian”, the country heats up on average on 0,4 °C in a decade — twice quicker, than average global temperature increases.

The document published last week in Journal of Glaciology confirms words of the Loop. The group of the international scientists used computer models and satellite data to clarify the possible reason of rapid unwinding of enormous avalanches. They set that, most likely, the collapse was such bystry because of presence of thawed snow which is formed as a result of processes of thawing on a glacier and actually does ice to more slippery.

“In view of the speed to which there was an event, and the area covered with an avalanche I think that it could occur only in the presence of thawed snow” — the coauthor Lonnie Thompson, professor of sciences about Earth at Ohio University (USA) marked.

The origin of thawed snow in Ara is still unknown, but, according to Thompson, the reason is clear. “Considering that the average temperature on the next meteorological station rose approximately by 1,5 °C over the last 50 years, it is quite probable that snow and ice thaw, and water filters under a glacier down”.

The growing temperature can lead to a collapse and other glaciers in the western Tibet, researchers say. Now there is no way to predict such disasters, and it is bad news to the Tibetan plateau in general. The so-called “roof of the world” which covers the most part of Tibet and some regions of China and India is storage of the largest volume of the frozen water outside polar regions. Being a source of several large rivers, including Yangtze, Mekong and Indus, she supplies with water nearly 2 billion people in Asia.

Scientists in China warn that climate change represents serious threat for the Tibetan plateau: his glaciers thaw with a speed of 7% a year. If this tendency of thawing remains, by 2050 two thirds from them will disappear.