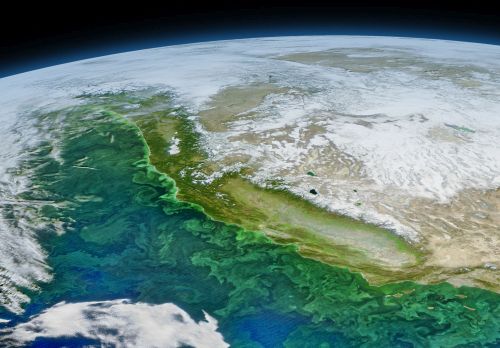 Neurotoxin, which hit in an organism causes terrible consequences, is increasingly found in seafood that is eaten. The reason is simple: heat the water of the ocean “bloom”, and the tiny algae that produce toxic substances cause the death of many mammals. But is it possible to avoid mass poisoning?

Doveva acid (also known as “acid zombie”) is a substance produced in natural environments, tiny algae, phytoplankton. In fact, now nobody knows what it’s for. “Shellfish that eat the algae blooming, seems completely do not pay attention to the toxin,” says Morrigan McKibben, a graduate student from the University of Oregon. But here’s the paradox: as direct phytoplankton eaters are immune against the toxin, other animals are subjected to terrible torments, if I accidentally eat it. Doveva acid mimics the neurotransmitter called glutamate, and provides a much better connection with the brain than the original. As a result, this leads to the fact that the production of neurotransmitter is reduced, and the person has convulsions and loss of memory. Some studies show that this toxin contributes to the development of Alzheimer’s disease in sea lions and a hundred he is guilty of mass deaths of all those associated with the ocean, from whales to seabirds. People also suffered.

“Why are these tiny creatures produce a toxin that begins to work only on a couple of levels up the food chain? We don’t have an answer,” says McKibben. Whatever it was, no less important issue for scientists is the ability to predict the increase in the level Domovoi acid in the regions and the opportunity to keep her as far away from food. In the new study, published in the Proceedings of the National Academy of Sciences, biologist provides evidence that warming oceans can lead to an increase in Domovoi acid.

Using data from various sources, the researchers were able to detect the relation between weather cycles that heat the ocean (e.g. El niño) and the peak increase in the level Domovoi acid. Previously it was assumed that the warming of the water contributes to its “blooming”, but it has now become obvious. Because of the sharp temperature increase of the phytoplankton becomes larger, the toxin level grows and people get large doses of toxic substances along with food.

Now scientists believe that by tracking water heating with the help of numerous services and assistance to fishing companies, it will be possible to predict the growth dynamics of toxicity. Unfortunately, currently the only method of dealing with this phenomenon is to stop catching fish phytoplankton in the affected areas.