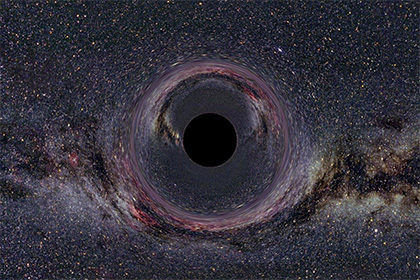 Space-time is the stage on which unfolds the entire history of the Universe since the Big Bang, through the birth of the milky Way, the Sun and the rise of the dinosaurs – to Alexander the great and an electronic popular-science magazines. To him often add the word continuum, from the Latin ‘continuous’ – but in some places, and the space-time ends. Here expire the usual laws of physics. Time here is different. Here not even to say “here” because here there is no space. This is never and nowhere. It’s a gravitational singularity.

The attraction of the geometry

Since the ancient Greeks, space was considered as something unchangeable, constant, homogeneous, and time – related cyclical spiral of the eternal return and repetition. To the era of the scientific-technical revolution these ideas has only grown stronger. The Cartesian coordinate system explained world of three mutually perpendicular axes, time straightened in a separate, independent of space (and generally anything), straight arrow. In many ways, we still live in the ideas that arose in the XVIII century.

The revolutionary views of Einstein has largely been to understand two important facts, overturned the views of time and space. First, they are interrelated and constitute a single space-time continuum. And secondly, the continuum is not constant and not constant: it is deformed in the presence of any form of energy, including in the form of weight.

The classic way to present this updated Einstein the world gives an example from geometry. Imagine a two-dimensional space stretched tight mesh, which put a heavy billiard ball. Run past him a tennis ball: the ball is a little pulled a grid and the ball in its motion will be deflected, as if drawn to them, and perhaps even “fall” for him. Gravity in the Einstein sense may be regarded as a geometric property of space-time, the distortion occurring under the action energy (mass). Even just rotating massive body drags the “grid” of space-time.

Mentally extend this example to four dimensions (three spatial plus one temporal), and you will receive an approximate geometric model of real space-time. Please note: where there is mass (energy) – there is no direct coordinate axes, and time itself ceases to be rectilinear and uniform for all observers. The idea of a straight is just a mathematical abstraction: the most direct thing we know from physics, is the path of the light beam, the movement of photons – but it is distorted under the action of gravity. Energized matter locally moves in a straight line, but in a global review of this video in a gravitational field is a curve. 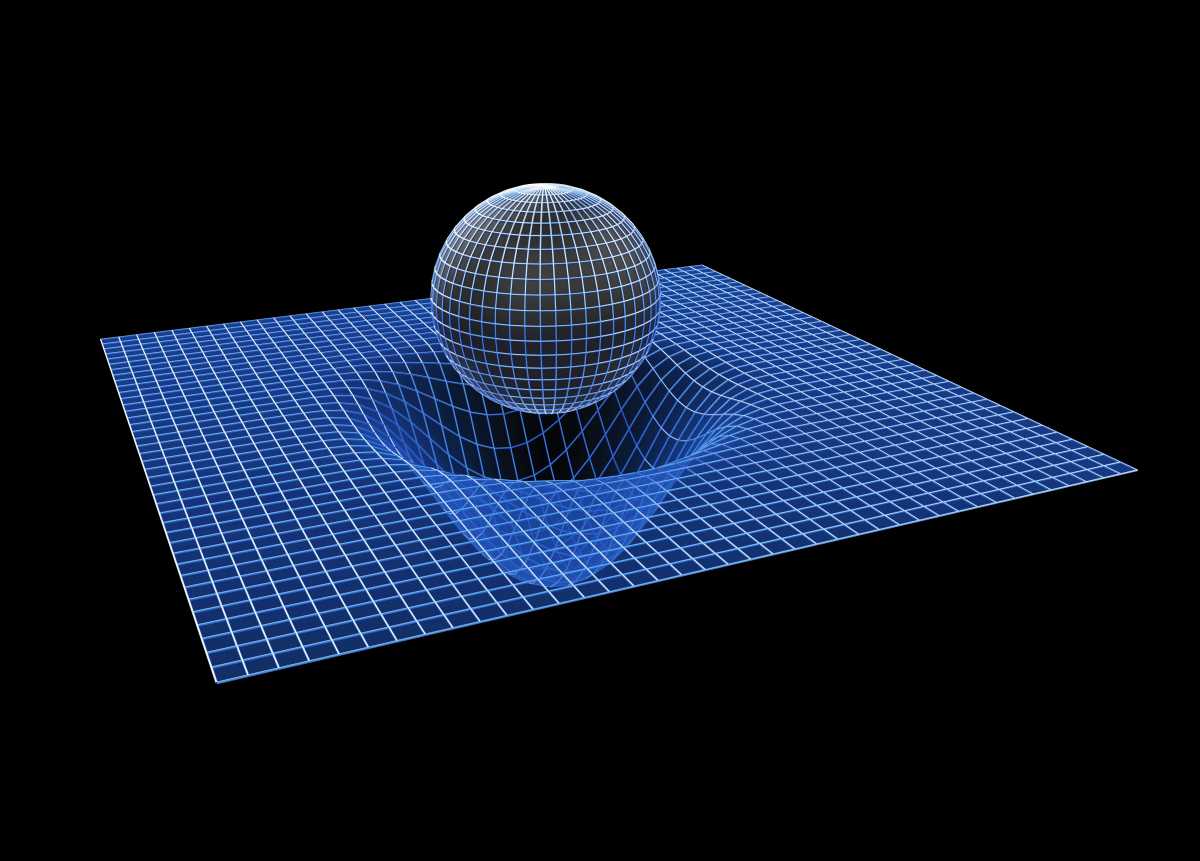 But if we abandon on the net from our geometric example is not a billiard ball, and something heavier? Dumbbells, two-pound dumbbell. Most likely, our sample exhibit will not sustain and burst, and in the center it will remain a hole, thread, scraps of space-time of our model. Something like the singularity.

Even in a philosophical sense, the singularity is the opposite of these (continuity, absence of gaps, quantized, separation into fragments – NS). The singularity is something that occurs only once. The point to which the event is sought, has not been resolved yet unique outcome. Explosion, merge, release. At the points of singularity of the mathematical functions dramatically change their behavior: rushing to infinity, break, suddenly vanish. If the variable X tends to zero, and a function from X to infinity, know that you are already in the singularity. In the field, which ends up with a continuous (continuous) geometry of space-time and there is something absolutely incredible.

Surprisingly, General relativity itself represents a border of its applicability: the singularity “doesn’t work” and she is. The theory not only points to the possibility of the existence of gravitational singularities, but in some cases, making them generally binding. Speech, in particular, about black holes – objects of immense density, which makes them incredibly massive for their size.

A black hole can have a mass comparable to the mass of a large planet with a billion or bigger stars, but this mass determines only the magnitude of the area around it, where there is only one gravity and where not to break anything, neither substance, nor radiation, nor information. The size of this “region of no return” is called the Schwarzschild radius, and restricts its event horizon, the imaginary line on one side of which the universe lives its own laws, and on the other dominates the singularity. 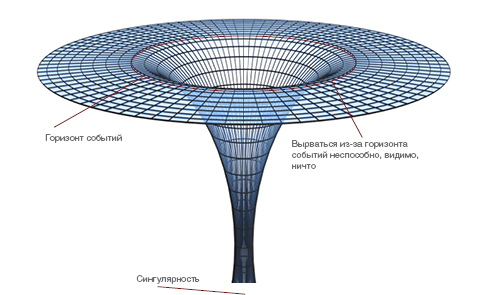 Gravity plus a cosmological

To say that the singularity “the laws of physics lose their power.” It is not just the usual laws are not applicable, not applicable as the laws of classical mechanics to the world of quantum particles. The colorful expression of a German Professor Klaus Uggla, the behavior of the mathematical equations and functions in the singularity “becomes pathological”. To notice this moment is enough just to observe the behavior of freely falling particles.

Regardless of the form of the particle, no matter where it falls, it tends to move on the most direct trajectory, which only exists in these conditions. In empty space, at the Earth’s surface or event horizon, the particle changes its trajectory only under the influence of other forces, including gravity. But at the singularity the gravitational field increases to innity, a freely falling particle is just… ceases to exist.

Direct ends here (this property of singularity is called geodesic incompleteness), and with them cut off and the fate of the particles. As shown about 40 years ago by the great mathematician Roger Penrose, geodesic incompleteness needs to occur inside any black hole. Later his calculations developed by Stephen Hawking, extending these ideas to the whole Universe.

Yes, in the beginning was the singularity. In 1967 Hawking is strictly proved that if you take any solution to the equations of General relativity and “deploy them” back in time, in any case in an expanding Universe we will come to it, to singularity. The endless failure of the “cosmological mother” and blossomed into a flower of our space-time.

However, for all its beauty “theorem of singularity Penrose – Hawking” only indicate the possibility of their existence. What’s going on in there that can “see” in the heart of a black hole and what was the universe before the Big Bang, they don’t say anything. Take the cosmological singularity Hawking: it must have both infinite density and infinite temperature, combine that still does not work. Because of the infinite temperature implies infinite entropy, the measure of chaos of the system and infinite density, on the contrary, points to the chaos that tends to zero.

The singularity is laid bare

However, this is not the only oddity around the singularity. Among the outlandish hypotheses, built on a strict Foundation of the General theory of relativity, it is worth remembering the idea of the existence of “naked singularities” – not surrounded by an event horizon, and therefore it is quite observable from the outside.

According to some physicists, a naked singularity may appear from an ordinary black hole. If the black hole is rotating extremely rapidly, the singularity is point can purchase a ring shape of the torus, surrounded by the event horizon. The faster the hole rotates, the more converge the outer and inner horizons, and at some point they may merge, disappeared.

Unfortunately, in reality, to observe a naked singularity is not yet possible, but in fiction she can be found regularly. One inhabited by intelligent beings colonies in the cult movie “Star cruiser “Galaxy” revolves around a star or planet, and around a naked singularity.

To say that Roger Penrose introduced in cosmology, the principle of cosmic censorship conjecture, according to which naked singularities in the Universe can not be. Figuratively scientist formulated his approach: “Nature abhors naked singularities”. This principle still remains unproven and not refuted completely. 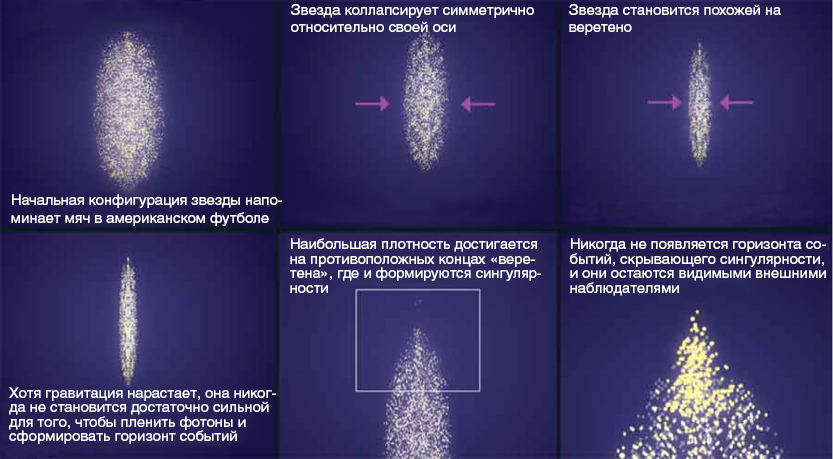 How (not) to fall into the singularity

Logically, you can come to the conclusion that to be inside the singularity we can not ever – until the final destruction of the Universe. Let’s imagine a particle attracted by the black hole. Here it is, the accelerating spiral is close to her. The stronger gravity and higher speed, however, according to the equations of Einstein, stronger slows down over time. Finally, our particle crosses the event horizon.

How much she spent on it time? To the casual observer it could be years. But the particle tends to a singularity in the center of the hole is the space – time around it literally stands on its hind legs, the time for particles almost stops. You can imagine it, and Vice versa: the Universe in comparison with it accelerating almost indefinitely.

But even black holes are not eternal. As shown by Stephen Hawking back in the 1970s, a complicated game of gravity and quantum effects near the event horizon of all black holes gradually evaporate and sooner or later disappear. Maybe disappear and the particle never reaching the singularity. But then again, paradoxes appear worse than those that he met Alice in Wonderland. For example – where is this particle? 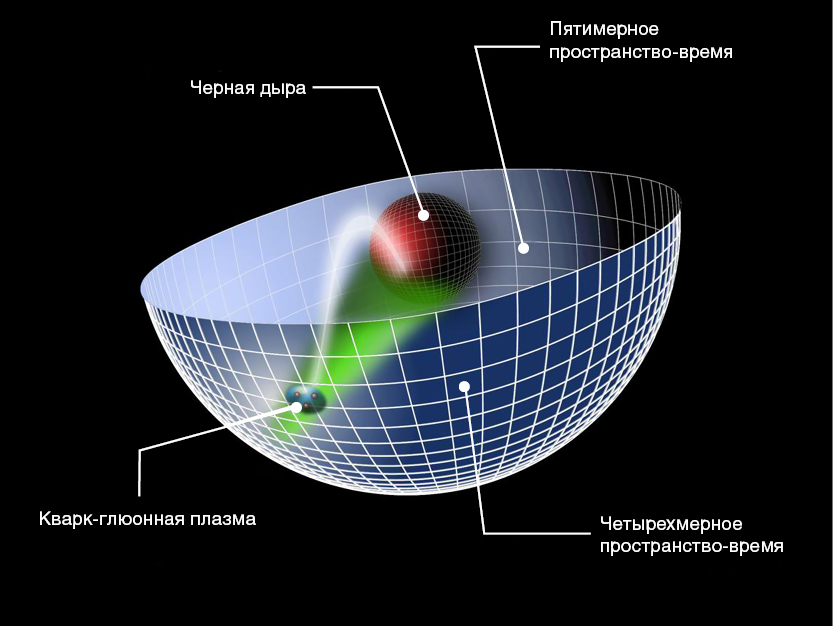 From the point of view of theoretical physics, black holes are empty. Yes, they limit the event horizon, but there is nothing behind it that could be measured, to identify, capture, and means nothing at all. The entire mass of the black hole is concentrated into a singularity – an infinitely small point surrounded by a field full of almost metaphysical darkness. 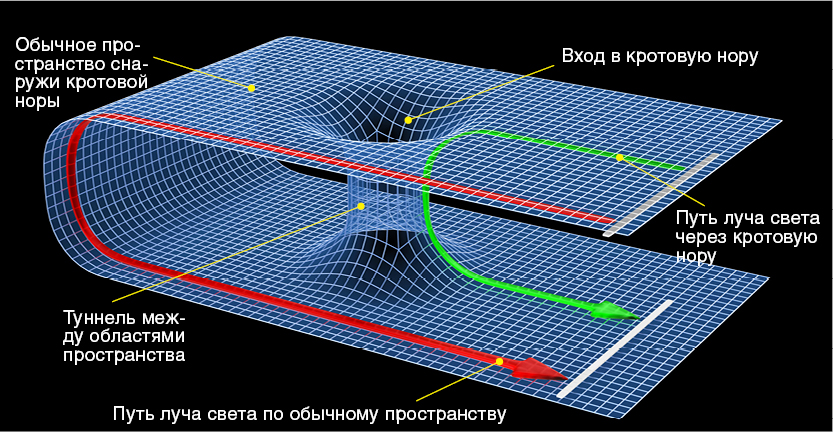 What she has inside?

Some theorists believe that the universe does not tolerate not only naked singularities, and discontinuities of space-time. Therefore every singularity is a wormhole – kind of a failure, a tunnel that connects one region of the world with a different “direct course”, so-called “wormhole” or “wormhole”. But this is only a hypothesis, and it is unknown whether there will be we ever able to confirm or deny it. 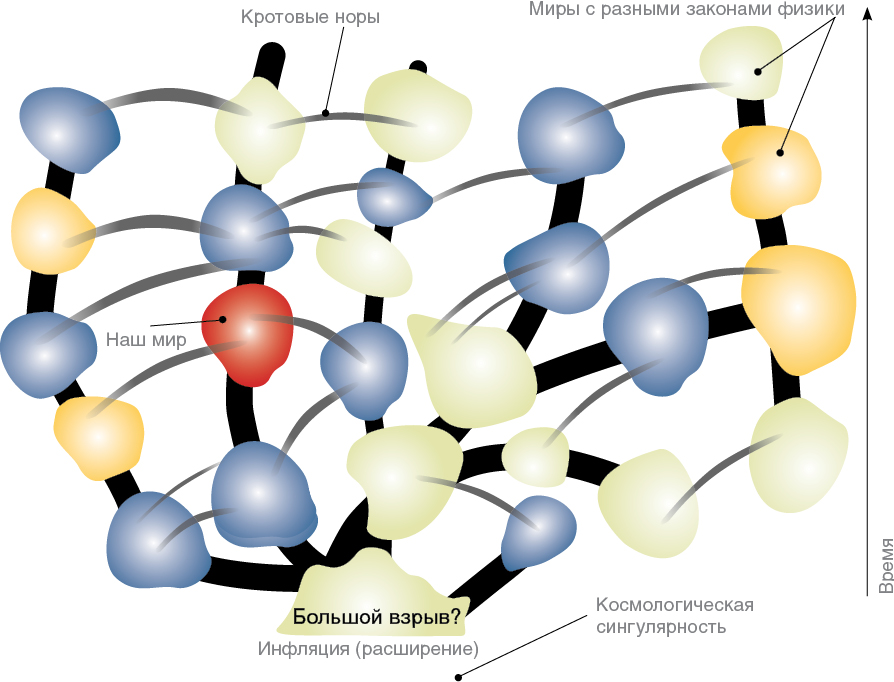 The main question remains: what’s inside the singularity? What comes after the very fabric of space-time wrinkled, stretched, dubitsa, while not broken completely? To answer it simple: it is unknown.