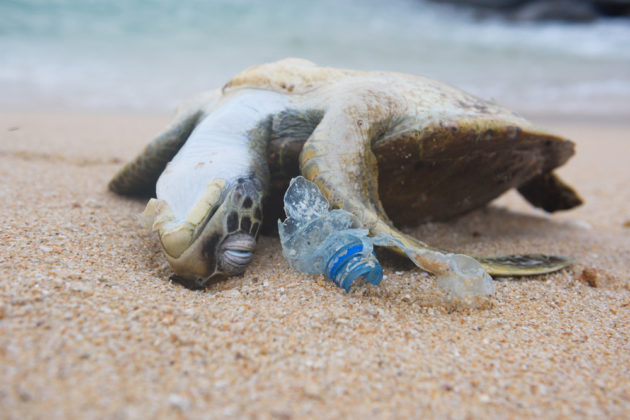 Scientists at the University of Exeter, as well as representatives of the Society for the Protection of Turtles (Cyprus), studied the remains of turtles that were found on Cypriot beaches.

Plastic was found in the gastrointestinal tract of all individuals, and inside one turtle the number of pieces of plastic reached 183.

Scientists could not conclude how much plastic affected the death of turtles, as most likely the fishing nets became the cause of their death.

Earlier, the results of a study were published according to which leatherback turtles consumed plastic that looked like food consumed by jellyfish. According to Dr. Emily Duncan of the University of Exeter, the purpose of this study was to trace whether the same phenomenon is observed among green turtles.

“Sea turtles are primarily visual predators that choose food based on its shape and size, and in this study we found evidence that green turtles consume plastic of certain sizes, shapes and colors.”

“Unlike the plastic waste found on the beaches, the plastic that we found in the remains of turtles suggests that they prefer black, green or transparent” pieces of elongated shape. This plastic can also be garbage bags or bags.

Duncan is also a National Geographic researcher and a member of the Sea to Source: Ganges Plastics Expedition team. She is currently working on similar studies on plastic consumption by turtle populations in Australia.

According to the study, smaller plastic turtles usually find more plastic. This can be explained by the fact that they have less experience (and therefore are more likely to incorrectly determine their food), or because they change their diet with age and with an increase in their size.

Of the 34 turtles examined, 19 individuals were examined for gastrointestinal tracts. Each of them contained plastic.

According to Professor Brendan Godley, this study is crucial to understanding which types of plastic are more hazardous to the environment, which will help to reduce its consumption more effectively.