Gulf Stream will stop because of global warming 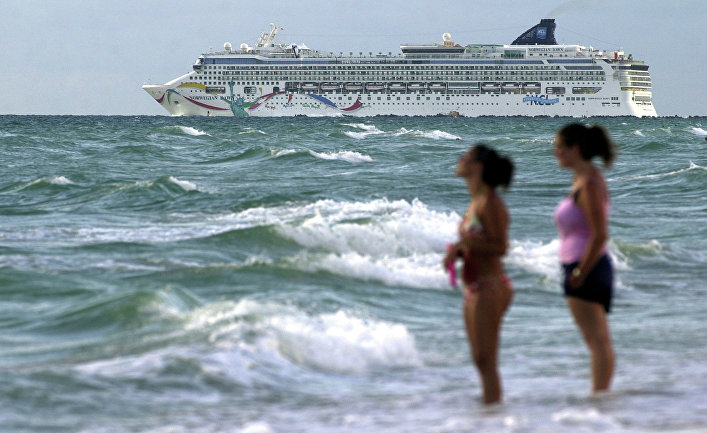 If to trust fresh calculations, huge circulation of water in the Atlantic Ocean can stop within 300 years if concentration of CO ₂ in the atmosphere doubles.

The idea that Gulf Stream can stop has led to emergence of awful imaginations on a screen, though hasn’t found big understanding at scientists.

But the recent report published in the famous magazine Science says that researchers of climate have underestimated a possibility of a collapse.

Blow Liu and colleagues researchers in Skripps’s (Scripps institute) Institute have made some calculations which say that Gulf Stream can stop the existence if the climate becomes warmer, and it means that warm ocean water can cease to come to colder areas.

Scientists claim that essential cooling of Northern Atlantic and the neighboring territories can turn out to be consequence of it.

“If it is the truth, then the situation for Norway will change radically” — Rasmus Benestad from Meteorological institute says, the Norwegian researcher dealing with problems of climate, having got acquainted in more detail with material in the Science magazine.

If to trust the new report, then Gulf Stream can become one third weaker within hundred years, and in two centuries in general to stop the existence.

NB! Consider that the concept “Gulf Stream” initially doesn’t mean an ocean current directly at coast of Norway. Get acquainted with the facts!

So far as concerns Gulf Stream, it is worth being especially circumspect. Actually only one of them — the real Gulf Stream is about three various systems, and:

Gulf Stream: Can be considered as the branch AMOS bearing warm water to the North. Shares in two, the most part of water arrives to the east or the northeast, there, that is called the North Atlantic current.

Changes in “the salt budget”

The new research differs from former researches of Gulf Stream in the fact that differently estimates the content of salt in the ocean.

Traditionally was considered that Gulf Stream will remain quite stable, despite warming of climate and that easing and that moderate, can be “only” in the next centuries.

Many scientists consider that these forecasts were insufficiently correct, new calculations show that the ocean current in the Atlantic Ocean reacts to changes of temperature and content of salt much more sensitively, than it was supposed earlier.

Blow Liu and colleagues say that changes have already begun. Circulation in the Atlantic Ocean became already weaker in the last centuries though there is no full confidence in it and.

“Vicious circle” which not to stop

What can happen to Gulf Stream — the example of a classical turning point in climatic system, is written by the German researcher of climate Stefan Rahmstorf from the Potsdam institute to comments to article in the Science magazine.

If the current weakens, intake of salty water will decrease that will promote in turn what will settle waters less. And thus, the motor of an oceanic current will become less powerful.

“It is a critical point where it becomes a vicious circle which can’t be stopped. But it is still not clear where this critical point” — Ramstorf says.

Two years ago Ramstorf himself has published quite controversial report in which it is said that the Atlantic meridional circulation (AMOS) will be much weaker.

If results of a new research get support, it can mean that it is necessary to make changes to the calculations concerning climate of Norway in the future, Rasmus Benestad from Meteorological institute says.

“It can have big consequences for Norway. The forecast for the next 50 years can be reversed”.

If transfer of heat in the ocean changes, such countries as Norway and England can become in the future colder, than tell present forecasts.

“What happens to Gulf Stream can counteract global warming. Perhaps, the climate some time will be stable? In that case, to us will carry” — Benestad who explains that consequences of weakening of Gulf Stream first of all will become noticeable in separate parts of the globe says.

He adds that possible change of usual routes of storm at coast of Norway will become one more consequence.

The oceanologist Svein Østerhus from the Bergen Uni Research doesn’t consider a situation so dramatic.

Since 1965 oceanologists from Bergen are engaged in measurements of that branch of Gulf Stream which passes along the Norwegian coast. In language of professionals it is called the Norwegian Atlantic current.

“We don’t observe any weakening of the Norwegian Atlantic current. On the contrary, there is a tendency to his strengthening” — Esterkhyus says.

It isn’t excluded that at coast of Norway the oceanic current can continue to exist, as before, even if large-scale circulation in the south of the Atlantic Ocean will become weaker.

“It is two factors which on the one hand are interconnected, and with another are independent from each other”.

“The others have to continue this research too”

“It is so serious questions, in particular, because of thawing of ices in Greenland that a thought that it in the future can weaken Gulf Stream including at coast of Norway, it doesn’t seem unnatural at all”.

Now other researchers have to solve as far as they will trust the conclusions drawn in a research Blow as Liu and to.

“My opinion is as follows: their results have the right for existence. But it is quite possible that they have made some mistakes, so a problem of others — to check these results” — Rasmus Benestad says.

Stefan Ramstorf agrees with him.

“I hope that this ominous conclusion will inspire as much as possible groups of scientists on continuing researches”.

God damn I’m freezing my ass off in Virginia! 20 degrees below average temperature and that’s with global warming!