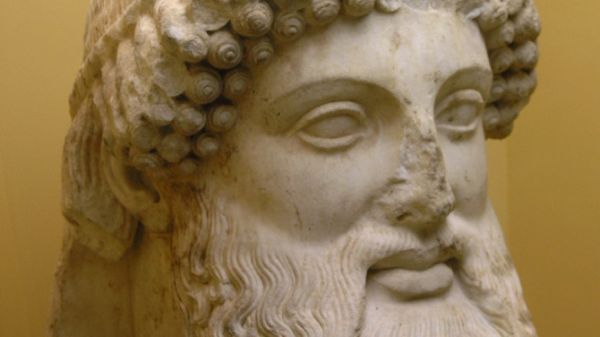 The head of a marble sculpture of the god Hermes of the late 4th – early 3rd century BC discovered in Athens during construction work, the Greek Ministry of Culture and Sports reported.

According to him, the marble head of Hermes was found last Friday during excavations as part of a project for the construction of new sewer networks and their connection to houses in the territory of the Athens municipality, which is being implemented under the control of the Athens Antiquities Inspectorate of the Ministry of Culture. The artifact was found opposite the church of Agia Irini (Saint Irene) on the central street of Aeolou at a depth of only about one and a half meters from the surface of the road surface.

The department noted that “the head of the sculpture of Hermes depicts a god in adulthood and, apparently, was a fragment of a column.” “Such columns were installed at crossroads and streets, they served as a kind of road signs in antiquity. This is an original work, probably from the end of the 4th – beginning of the 3rd century BC. The find, which is in good condition, was immediately transported to the warehouse of the Athens Antiquities Inspection “, – the message says.

Hermes is the god of trade and happiness, cunning, theft, youth and eloquence in ancient Greek mythology. He is also the patron saint of heralds, ambassadors, shepherds and travelers.

In connection with the unique find unexpectedly made in the very center of Athens, the mayor of the capital, Kostas Bakoyannis, wrote on Facebook: “She was found only one and a half meters underground during the renovation of the infrastructure on Aeolou Street in the area of ​​Agia Irini Square. antiquities inspection. Unique Athens! Pride and admiration! ”

Finds during the construction of the metro

In March 2019, archaeologists found the remains of the ancient walls of the Greek city of Thessaloniki during the construction of the metro. These walls were built of green slate and fortified with large stones located across. The wall thickness ranges from 60 to 90 centimeters. The find made archaeologists think that in the Hellenistic period (323 – 146 BC) Thessaloniki may have been a city stretched along the coast, which began from a powerful fortress at the top of a mountain and descended to the sea.

During the construction of the metro, archaeologists have found about 300 thousand artifacts and ancient burials, including a tomb decorated with frescoes of the 4th century BC. e. In particular, 83 graves from the Eastern cemetery of ancient Thessaloniki were discovered only at the northern entrance to the Sindrivani station.