Heavenly waves in the photo from the satellite 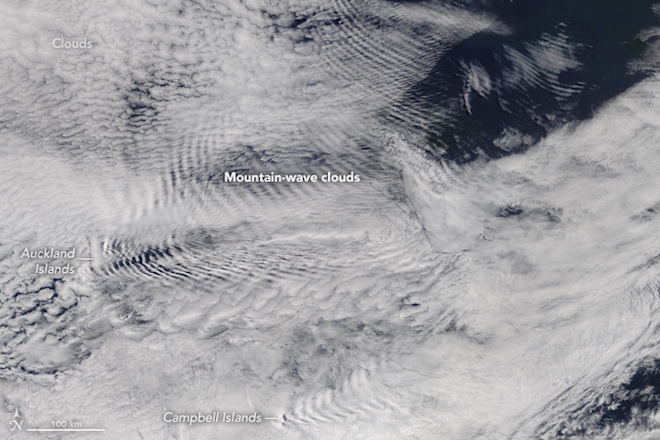 When you next see a duck floating on smooth water, pay attention to a series of V-shaped waves, the sides of which form an angle of 40 degrees. To describe this phenomenon, physicists use the term Kelvin waves, although other names are also common, for example, headwaves.

In the case of a duck, movement along a calm surface causes waves. A similar process can occur when air flows over a stationary object. This is exactly what happened when the MODIS spectroradiometer on NASA’s Terra satellite received this image of cloudy waves over the mountains near the Auckland Islands. Wavy clouds swim eastward on the leeward side of a small archipelago about 450 kilometers south of the South Island of New Zealand.

The islands are known for their uneven terrain, and some of the peaks, including the Reinal, D Yurville and Eston mountains, are over 600 meters high. With these peaks sticking out above the surface of the ocean, the islands violated the smooth flow of air and created atmospheric gravity waves and wave clouds.

The presence of clouds makes it possible to see waves. The cloud pattern reflects the location of the wave crests and troughs. Wet cloudy air above the ocean, which meteorologists call the sea layer, is often covered with a layer of dry air. Clouds form or remain on the crests of the waves, because the air cools down when it rises, and the water vapor condenses into cloud drops. In the wave hollows dry air from above is immersed in the sea layer, replacing the cloudy air. As the air descends, it heats up and causes the clouds to evaporate.