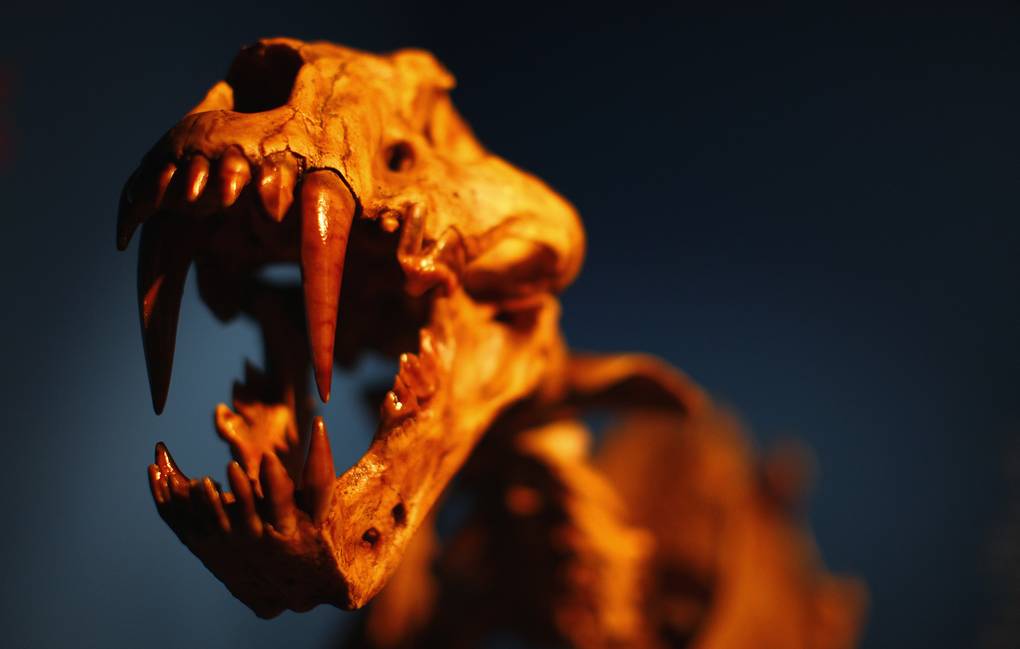 Paleogenetics have completely deciphered the DNA of the homotherium – saber-toothed cats that lived in Europe and America during the Ice Age and became extinct about 12 thousand years ago. An article describing their work was published by the scientific journal Current Biology.

“The genome of these saber-toothed cats says that they were very skillful hunters. They saw very well during the day, they had powerful hearts and lungs, that is, they were adapted for a long run. All this, we believe, indicates that these cats hunted in large groups, driving the victim until it falls, “said one of the authors of the article, paleogeneticist from Copenhagen University (Denmark) Michael Westbury.

In the Ice Age, there were two types of saber-toothed cats at once: the American smilodon (Smilodon fatalis) and the Eurasian homotherium (Homotherium latidens). Scientists suggest that they became extinct along with other large animals of that era, whose meat they ate.

Despite the outward similarities between Homotherium and Smilodon, scientists believe that they were only very distant relatives. The ancestors of both species were divided even before the beginning of the ice age. However, it was impossible to say for sure whether this was so until recently, since scientists did not have samples of fossil DNA from these animals.

Three years ago, paleogenetics approached the answer to the question of the relationship between Smilodons and Homoteria. They deciphered the most “tenacious” fragment of the latter’s genome – their mitochondrial DNA. It was recovered from the bones of an ancient cat that was found at the bottom of the North Sea, off the coast of the Netherlands, in 2008.

Westbury and his colleagues spent the next three years rebuilding homotherium’s complete nuclear DNA. They were helped in this by the fact that paleontologists recently found in northwestern Canada well-preserved remains of smilodon, which were in the permafrost about 47.5 thousand years ago.

Thanks to this, scientists “read” all segments of the ancient predator’s genome at least seven times. This minimized the number of potential DNA deciphering errors. The obtained paleogenetic data were compared with the DNA structure of modern representatives of the feline order, as well as with scraps of the genomes of smilodon.

It turned out that homotheria are very distant relatives of both smilodons and most other felines. Their ancestors separated from the common evolutionary tree of cats more than 22.5 million years ago, after which they never came into contact with them. This date, as scientists suggest, speaks in favor of the popular hypothesis that the ancestors of all saber-toothed cats were the so-called pseudo-Elurus – small ancient animals, similar in appearance to the civet.

In addition, scientists found that Homotheria had a unique set of genetic adaptations that are not characteristic of most extinct and modern cats. In particular, scientists found in them variations in genes associated with the development of complex forms of social behavior, as well as mutations that increased the endurance of the heart and lungs, as well as vigilance of the eyes during daylight hours.

All this, according to paleogenetics, suggests that homotherians were daytime predators who specialized in group hunting for large prey, driving them to death. Similarly, African wild dogs, hyenas, and many of their canine relatives forage for food. In the distant past, the direct ancestors of man specialized in such hunting.

“These were extremely successful cats that spread across five continents and existed on their territory for many millions of years. The modern geological era was the first in the last 40 million years, during which there were no saber-toothed predators on Earth. Unfortunately, we did not find them.” – summed up Ross Barnett, Westbury’s colleague at the university.