How animals see the world? 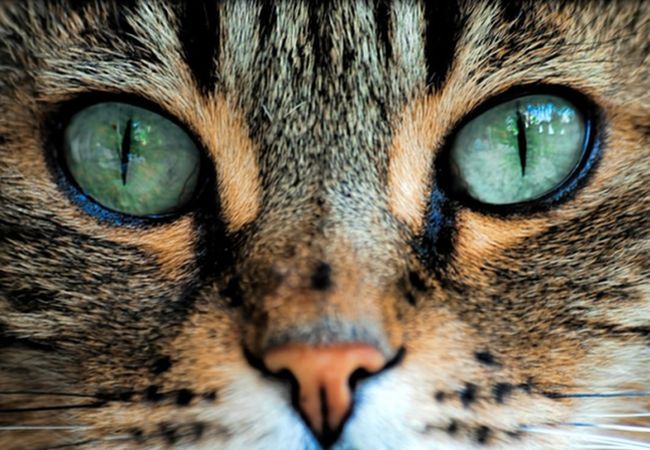 The average person can distinguish from two to eight million colors when visual acuity is 20/20 (Dutch ophthalmologist Snellen).

Cats can only distinguish blue, grey and yellow. Visual acuity of cats is in the range of 20/100 — 20/200, i.e. much lower than in humans. They can clearly distinguish between those items in that person from a distance of 200 feet, only being from the object at a distance of 20 feet. Cats have 10 times less light-sensitive cones on the retina making their vision is less sensitive to color.

Dogs are able to distinguish between shades of blue, yellow and green, possess the acuity of 20/75 and sensitive to light. Dogs have only two types of light-sensitive cone cells on the retina, in contrast to three types in human. Therefore, color world of dogs is limited.

Flies have panoramic vision: they see the world in 360 degrees. While flies see the world in slow motion. The reason for this is their tiny size and high speed of metabolism. Flies distinguish between blue and green.

Rat eyes located on different sides of the head. This arrangement allows a wide field of view and allows the animal to spot danger from any direction at once. Rats see the world clearly and in grayscale.

Snakes have poor eyesight and they distinguish only two colors. Instead, they use infrared sensors, which allow to create a thermal image of the surrounding world.