How did oxygen appear in the Earth’s atmosphere? 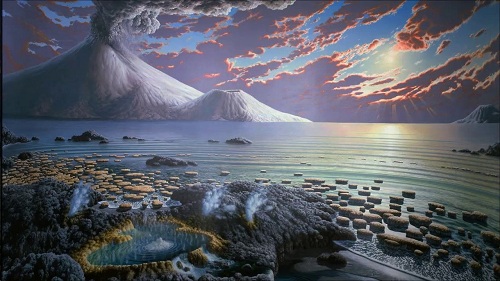 Scientists have used groundbreaking techniques to figure out how the Earth’s atmosphere was filled with oxygen billions of years ago.

The research is published in the journal Science. For most of its history, the Earth was home only to microorganisms – multicellular life appeared on it, according to various estimates, from 2.1 to 1.9 billion years ago. However, it flourished only 600 million years ago, in the late Precambrian. It was then that a wide variety of multicellular organisms – the so-called Vendian fauna – appeared. Oxygen played an important role in this process, among other things.

There are various hypotheses about its appearance in the earth’s atmosphere. The main one assumes that the only significant source of molecular oxygen is the biosphere, that is, photosynthetic organisms. Oxygen photosynthesis originated in cyanobacteria 2.7-2.8 billion years ago. So, over millions of years, these microorganisms have filled the atmosphere with oxygen.

However, American scientists suggest that other processes played an important role in this. Researchers at the Universities of Chicago and California have painstakingly recreated the chronology of events on ancient Earth and analyzed very old rocks, the composition of which changes with environmental conditions.

They noticed that before the atmosphere was filled with oxygen (the so-called Oxygen Catastrophe, which occurred about 2.45 billion years ago), our planet experienced short-term effects of small “oxygen bursts”.

It is known that the ancient oceans contained large amounts of iron, which should have prevented the accumulation of free oxygen in the atmosphere. At the same time, part of the oceanic iron combined with sulfur emitted by volcanoes and formed pyrite (it is also called “fool’s gold”). This process is accompanied by the release of oxygen. But which of these chemical reactions “outweighs” the other, the scientists did not know.

To find out, the researchers used state of the art equipment and a new method to measure tiny variations in iron isotopes. This helped scientists understand that, despite the oceans saturated with iron, certain conditions could contribute to the formation of enough pyrite, and therefore oxygen, which could be released into the atmosphere. The discovery helps not only to better understand the history of the Earth, but also to learn how the oxygen shell is formed on exoplanets, and, therefore, helps to find signs of life on them.