How our growth changes from era to era 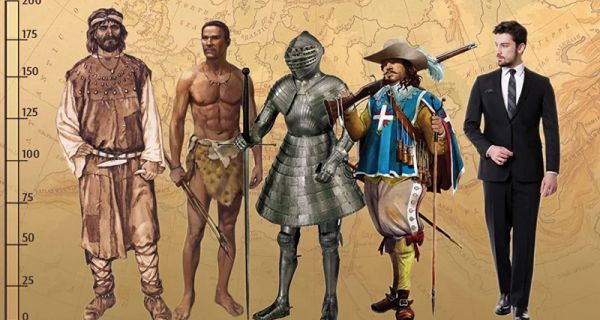 Height, or, as anthropologists say, body length, is an important characteristic feature of the appearance of different peoples. We are accustomed to the fact that the Chinese are usually short, while the Scandinavians, on the contrary, are several centimeters taller than the Russians. Of course, there are exceptions to the rule, but the general distribution according to the height scale, taking into account the average height of different nationalities, is unlikely to surprise anyone. Several years ago, a general ranking of average body lengths of people in various countries was published, and it turned out that Russian men are in 42nd place, and women – in 23rd.

Several years ago, Chinese archaeologists discovered several burials during excavations near the city of Jinan. Compared to modern Chinese, their ancestors seemed to be giants: several skeletons of people were found, whose height during life exceeded 180 centimeters, and one skeleton belonged to a person more than 190 centimeters tall!

These people lived five thousand years ago in the territory of the modern province of Shandong. It is unlikely that they had any advantages in the availability of food compared to the modern Chinese, although, as archaeologists note, their ancestors lived in relative comfort, had separate bedrooms, kitchens, and jade items and multi-colored ceramics were found next to the skeletons.

It turns out that after a period of growth, there was a prolonged deceleration (a process opposite to acceleration), which led to a decrease in body length indicators of modern Chinese. What are these waves associated with?

Maria Dobrovolskaya, Doctor of Historical Sciences, Leading Researcher at the Institute of Archeology of the Russian Academy of Sciences, who defended her doctoral dissertation on the topic “The Phenomenon of Nutrition in Human Evolution and History”, explains: “Among anthropologists, the question of the origin of waves of acceleration and retardation (retardation) remains open. It is clear that purely social processes influence this, but it is also clear that this cannot be explained by the nature of the diet alone. True, there are absolutely understandable phenomena: one malnourished military generation leads to a decrease in body length for the entire nation. Why are the Chinese so tiny now? This can be explained by the fact that for many generations they had access only to plant foods. However, there are also examples of when the growth of a nation is declining for some other reason. For example, now in Russia children no longer outgrow their parents in comparison with the generation of the 80s and 90s ”.

Indeed, according to the indicators of growth curves for different countries, the body length of Russian citizens increased until the 2000s, but now the curves have gone down. For the past 150 years, we have grown alongside all of Europe, Asia and North America. The greatest success in this area was achieved by men from Iran and women from South Korea: on average, their height increased by about 16 and 20 centimeters, respectively. However, the absolute record holders in growth today are Dutch men – their body length is on average 182.5 centimeters. That is, over the past 150 years, they have grown by 20 centimeters and have become the tallest people on Earth.

True, this record is rather dubious, if you look at things more broadly, to study not the last 150-200 years, but millennia.

“If we take, for example, the Altai Afanasievites (South Siberian archaeological culture of the Bronze Age, III-II millennium BC), – says anthropologist, Doctor of Historical Sciences, leading researcher at the Institute of Archeology of the Russian Academy of Sciences Maria Mednikova, – their average height was slightly whether not 189 centimeters. They were the tallest among their contemporaries. If we assume that some of the Afanasievites spread to the east, then it is quite understandable why skeletons of tall Chinese are found there.

If you travel back to even earlier times, 25-30 thousand years ago, we will see tall Cro-Magnons in the vastness of today’s Europe. But a modern man cannot try on the armor of short medieval knights. That is, at all times there were waves of change in body length. I think the reasons for the decrease and increase in height can be explained by 50% by genetic factors, and the remaining 50% by social factors. Therefore, auxologists (auxology is the science of studying human growth and development) call body length a mirror of the processes taking place in society. “