How passes the life of icebergs? 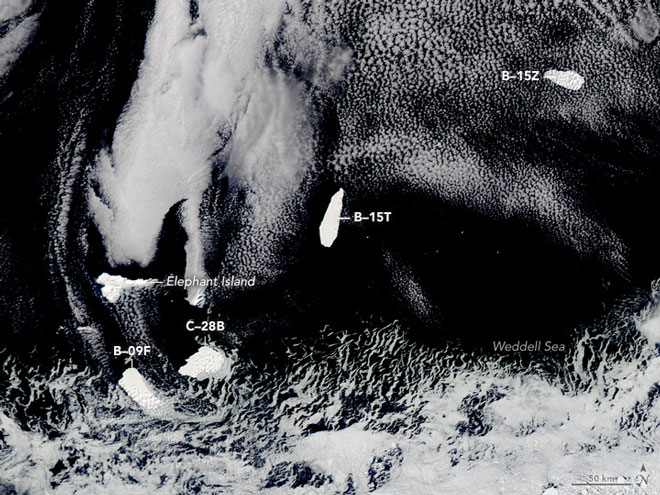 If Antarctic icebergs could speak, then they would tell epic stories about their birth, collisions, destruction and long travels across the ocean. But as they do not say, scientists rely on satellites to collect the history of the life of icebergs, some of which drifted for decades.

In this image of the Southern Ocean, near the Weddell Sea (in the south) and the Drake Pass (in the north), four icebergs of different size and age are visible. The picture was taken on October 20 with the help of the MODIS spectroradiometer on NASA’s “Aqua” satellite. The fifth white figure in the photo is similar to an iceberg, but in fact it is an ice-covered island of Mordvinov (English Elephant Island).

Icebergs are called according to the sector of Antarctica, from which they break off. Most of the icebergs in this image, beginning with “B”, originate from the Ross Sea region and drift counter-clockwise around the continent. “The main part of the story is that it was a long journey,” said Kelly Brunt, a glaciologist at the Goddard Space Flight Center.

Iceberg B-09F broke away from the B-9 iceberg, which in 1987 broke away from the Ross Ice Shelf in West Antarctica. A massive iceberg took more than two decades to get out of the Ross Sea and pass along the coast to the Merz glacier in East Antarctica. Along the way, it split, and one of its fragments, not represented here B-09B, in February 2010 collided with the floating tongue of the Merz glacier, forming an iceberg C-28, which later also split into parts, including the C-28B. Two other icebergs – B-15T and B15Z – broke away from the B-15, the largest iceberg ever recorded by satellites.

Icebergs in this image brought to their current location ocean currents: coastal countercurrent, which flows counter-clockwise near Antarctica; and the Weddell Sea Circuit, which rotates clockwise and carries an iceberg in the western Weddell Sea to the north.

Continuing to drift to the north, these icebergs are likely to be thrown back to the east when they collide with a powerful Antarctic circumpolar current passing through the Drake Passage. “The strait keeps them from further movement counter-clockwise around the continent. From this moment, the icebergs swim north to the equator and disappear rapidly, “Brant explained.

“Glaciologists used this part of the life cycle of the iceberg as a kind of natural laboratory to see how they eventually collapsed. It is known that they form a pond with water, which then makes its way through the iceberg. Thus, the life cycle of many Antarctic icebergs is being completed. “