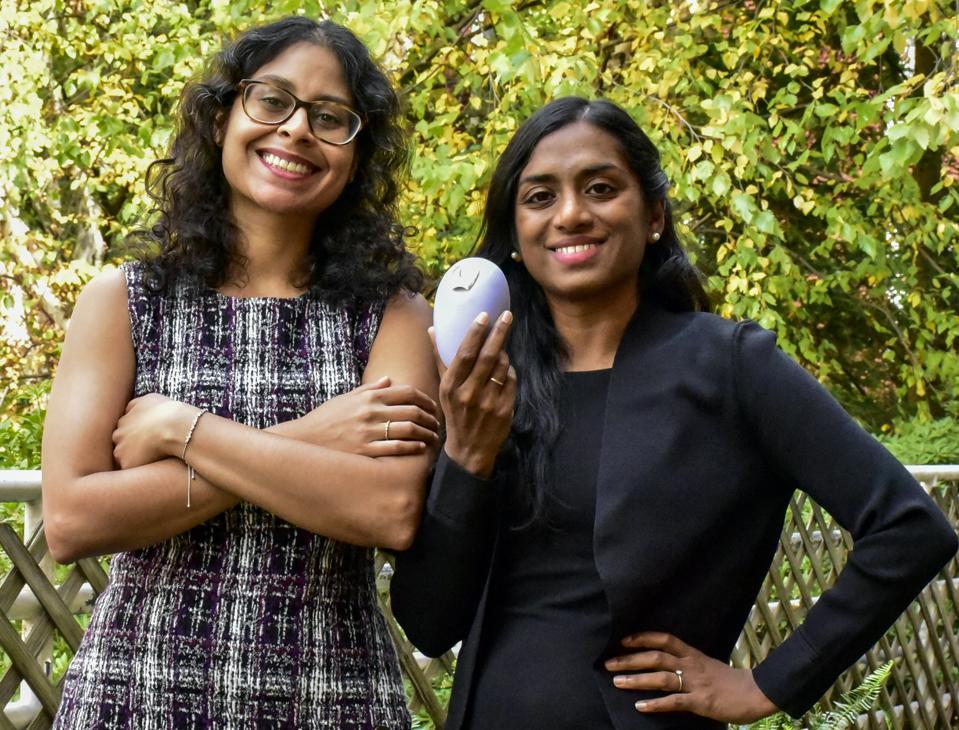 An invention that began at a kitchen table by two women in their twenties has officially launched this week after raising nearly $10 million in funding. Developed by Madhavi Gavini and Rathi Srinivas, both trained in chemical engineering at MIT, the innovative device delivers over the counter skincare actives such as vitamin C, retinol, collagen and peptides by penetrating the skin with a fast-moving mist. A substitute for needles and creams, the contactless “droplette” is designed for at-home use and may revolutionize how medication and other sought-after nutrients reach the body.

“Unlike needles, we’re not poking your skin, so you don’t have bleeding or scarring or infection risks,” Gavini said.

Harvard and MIT dermatologists and plastic surgeons are among those who have tested the product and serve on the company’s scientific advisory board. Walter Reed Army Institute, a partner of Droplette, is in the process of utilizing the device for the treatment of soldiers’ blast wounds. Last fall, the founders raised $8.8 million in Series A funding led by Spark Capital. In 2017 they raised $800,000 from a number of firms including MIT Alumni Angels in Boston and Bolt. They also received approximately $900,000 in grant funding from Walter Reed, the National Institutes of Health and NASA.

Currently sold for $299, the droplette includes three capsule types: one has retinol as the main ingredient, another has collagen and peptides and a third contains glycolic acid and salicylic acid.

Gavini and Srinivas knew each other for years before joining forces. Srinivas was finishing up her Ph.D. at MIT when she began exchanging ideas with Gavini, who by then, had developed an algorithm to predict protein structures. This enabled Gavini to create a drug compound that would bind to them. Her drug, which is currently undergoing pre-IND review before FDA submission, reduces scar tissue due to its anti-fibrotic receptor. This helps heart cells to survive and reduces the risk of cardiomyopathy and heart failure.

Inspiration for dermatological care struck after the two learned about a rare skin disease, epidermolysis bullosa, at a medical conference in London one year. In EB, one gene that connects skin to muscle is missing, inevitably creating tearing and flaking. They thought, what if they could put the gene back in? “We could take the genetic material that’s missing and spray it back into the skin,” Srinivas explained. The women decided that developing a method to deliver medication such as antibiotics and steroids through the skin, without irritating the already delicate surface, would be their long-term goal. A topical cream wouldn’t be helpful since the skin flakes right off. The traditional IV method isn’t the most promising either, according to Gavini; it infiltrates the blood stream, and from there travels to the heart and kidneys in high volume, placing organs in a compromising position. Thus, they went for a painless micro-mist where tiny droplets would target the precise site of infection. The current launch delivers skincare actives, and the founders are working on delivering medication.

Gavini and Srinivas began researching the most common requests dermatologists received from patients, and honed in on those active ingredients. “We went out of our way and we were really careful and rigorous to make sure all the actives in there are validated,” Gavini said.

They ordered some parts from ebay, including pumps, humidifiers and basic electronic components, and got to work. “We did some studies at home to prove to ourselves we could actually deliver molecules under the skin,” said Srinivas of their trial runs on Gavini’s kitchen table in Cambridge, Massachusetts. After filing patents, they spent time on research and development to optimize configurations and software. The grant from NASA helped with this, and they began working with consultants to develop the first prototype.

“Having a technical background helps a lot because tinkering with stuff is something we both like to do,” Srinivas said.

They went through at least 11 or 12 prototypes, and then continued to make slight modifications. “Even little things, like we’ve transitioned from a charger that plugs to the wall to a wireless charger,” Srinivas said.

Both Gavini and Srinivas agree that scaling is one of the most challenging aspects of building this business. “It’s easy to build one version of this that works in a laboratory setting, but having it work consistently and well required a ton of customization,” Gavini said. “Perfecting that was a huge challenge and we are really proud of that,” she said.

Their team, which is now comprised of 16 people, is actively working on an app where users can log usage and take photos to track their skin’s progress over time.