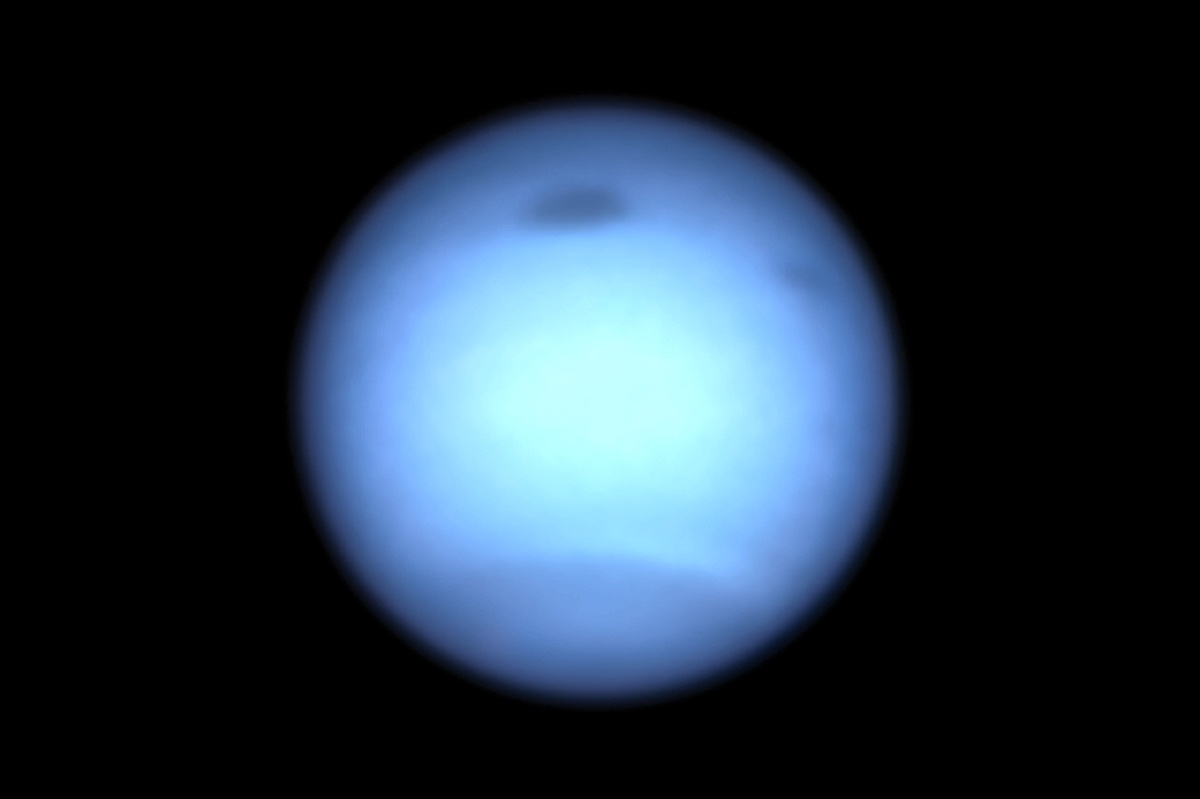 A huge dark spot in the atmosphere of Neptune – a storm first noticed a couple of years ago – and does not think to dissipate: contrary to the expectations of scientists, it threw out a new smaller spot and changed direction, stabilizing again.

The most distant of the planets in the solar system – Neptune – is often called the ice giant, which occupies an intermediate position between the gas giant Jupiter and the Earth. Neptune is 17 times more massive than Earth, but 19 times lighter than Jupiter. Its dense atmosphere is mostly hydrogen and helium and is constantly bubbling. The Voyager 2 probe, which flew past Neptune in 1989, noticed a couple of extensive dark spots on its surface, which scientists have associated with local hurricanes.

Since then, similar spots on Neptune have been observed by the Hubble Space Telescope: they appear and disappear in about two Earth years. Hurricanes arise as areas of increased pressure at mid-latitudes, stabilized by the Coriolis force that arises from the planet’s rotation. Beginning in 1993, Hubble tracked three of these spots until they disappeared completely – as it moved towards the equator, the Coriolis force weakened and the hurricane dissipated.

However, the fourth dark spot for Hubble on Neptune (NDS-2018) managed to survive at the equator. This was reported recently by Michael Wong of the University of California at Berkeley and his colleagues who spoke at a recent online meeting of the American Geophysical Society (AGU). Their work is described in a press release distributed by NASA.

The current hurricane in Neptune’s northern hemisphere is nearly 7,500 kilometers across, the widest of the Atlantic Ocean. Hubble has been following him since 2018. Observations made by him in August 2020, when the hurricane was already at equatorial latitudes, showed that instead of dissipating, it began to move back to the north. In addition, the “main” hurricane has lost the environment of sparkling clouds that previously accompanied its movement.

Also, a second smaller spot (about 6300 kilometers in diameter) was noticed nearby. Perhaps they are related: according to the calculations of scientists, the reverse movement of the large spot began in January of this year – at about the same time when the small one appeared. It is assumed that it has separated from the first, while giving it a new direction. “We cannot yet prove that they are somehow related,” adds Michael Wong. “It remains a mystery.”