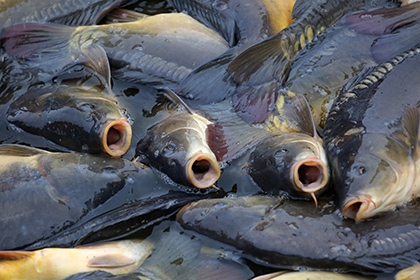 The Chinese biologists believe that in the next several years the huge carp created by them will be allowed for consumption.

The fish who received the name of a guanla grows twice quicker, than natural carps. It is also distinguished by the almost complete pantophagy — the animal eats a set of species of plants and microorganisms.

The first genetically modified carps in Academy of Sciences of the People’s Republic of China were created in the 1980th years. Were shown to general public of a guanla at the specialized scientific and practical conference which took place in Beijing (China).

Biologists also managed to receive the genetically modified carps not capable to manifolding. So far scientists conduct the researches allowing to reveal long-term consequences for health from the use of a guanla.

So far in the USA sale of a genetically modified salmon is allowed. The numerous researches devoted to consumption of products from GMO did not reveal threats for health of the person.