Humpback whales can assemble into “supergroups” 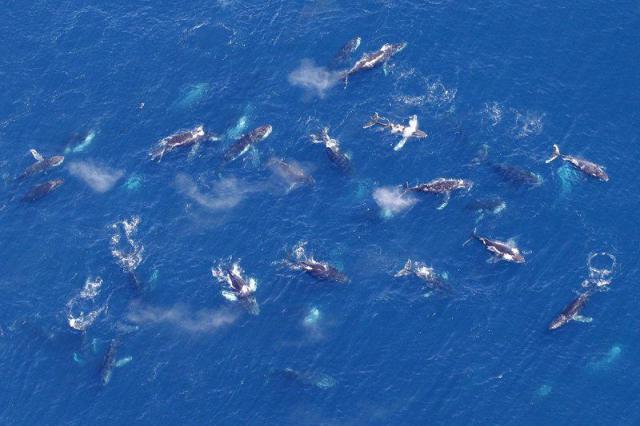 Scientists believed that humpback whales are loners, but a new study showed that they can assemble into groups of up to 200 individuals. The formation of such flocks was recorded three times in 2011, 2014 and 2015. While flying around the south-west coast of South Africa. Previously, scientists did not observe similar behavior in humpback whales.

As a rule, whales travel singly, only occasionally forming small groups that disintegrate after a short time.

During observations of whale migration, the researchers unexpectedly noticed how humpback whales form “supergroups” thousands of miles north of their habitual place in the polar waters of the Antarctic, where they used to eat krill in the summer. In winter, whales go to warmer waters in tropical and subtropical latitudes, where females give offspring.

Scientists suggest that the formation of “supergroups” of humpback whales can be a natural process. The fact is that over the last few decades the population of these animals has decreased by 90%, so specialists could judge their way of life only by individual individuals. Now there is a turn towards the recovery of the population, and, perhaps, we see a return to their previous behavior, scientists believe.