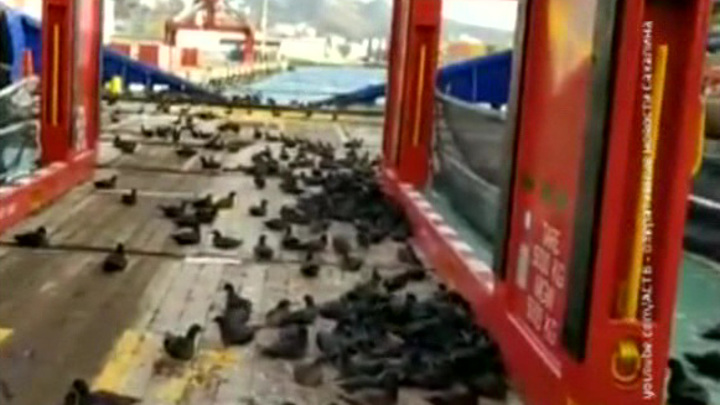 Hundreds of black birds on the deck of the icebreaker, around – the sea, but for some reason they are not in a hurry to return to the natural environment. Video from Sakhalin, and more precisely from the port in Kholmsk, which raises a lot of questions. Some already have answers. As it became known, on these frames – an emergency situation on board the supply vessel. It was there that suddenly a lot of gray petrels landed.

However, the return journey was closed for them. As ornithologists explain, it’s all about the features of the wing structure, because of which the birds couldn’t fly up “from the flat deck surface”. So, in fact, they were held hostage by the sailors, while preventing the crew from working. As a result, in order to begin unloading at the port, it was decided to try to return the birds to the sea. But there are some comments on the methods.

Judging by other videos, uninvited guests simply dared a broom. In the process, according to the local press, some of the birds could die. The Sakhalin Ministry of Ecology has already stated that the team’s behavior is “difficult to call humane.” And, nevertheless, it is not yet clear whether any damage to the petrels was actually caused. But why such a situation was possible at all and most importantly – how to act correctly after all?

So, hundreds of petrels on Monday night landed on the Vitus Bering ship, which was stationed in the seaport of Kholmsk in southern Sakhalin. Birds flooded the entire deck. The sailors filmed the invasion of birds on video. Petrels interfered with loading. However, they could not fly away on their own. As a result, the birds were simply pushed off the deck. How humane such a decision was, the Sakhalin environmental prosecutor’s office will understand. But ornithologists believe that, in fact, there was no other way to drive the birds away.

“Well, I don’t know about” rudely. “But yes, throwing it off the deck is exactly the way it is, yes. That’s right. Well, brush it off or throw it into the air, respectively. But, of course, it’s better to let it sit if the birds have sat down, they will rest “There, let them sit for a couple of hours, if possible. They will sit. And then the rest will fly quietly,” explains Sergey Kharitonov, a leading researcher at the Center for Bird Ringing at the Institute of Ecology and Evolution. A.N.Severtsova RAS, Doctor of Biological Sciences.

Petrels are actually very good at flying. They spend almost their entire lives hovering over oceans and seas, maneuvering for days in air currents. This species of birds does not need land, as in a permanent habitat. They can take short breaks right on the water, and are able to sleep right in the air!

The petrel wing is an incomprehensible model for technology. Aerodynamics of flight is complex and known only in general terms. Too many subtleties in this matter! During the flight, the position of the feathers changes, the wing area changes, its carpal and main parts move at different speeds and at different angles.

Petrels have powerful wings. What can not be said about the paws. The real weak link! They are so small and so close to the tail that the birds cannot even stand on them – they have to rely on their wings and chest. Therefore, the petrel can take off only by diving from a great height or catching gusts of wind above the surface of the water.

“From their islands they also do not take off from the ground. They walk on foot in droves. They nest in holes. They crawl out of holes. And this company, large entire streams, are looking for paths on the islands, go to the nearest cliff and, in turn, are dumped and take off “, Continues Sergey Kharitonov, a leading researcher at the Center for Bird Banding at the Institute of Ecology and Evolution Problems named after A.N.Severtsova RAS, Doctor of Biological Sciences.

Petrels are a type of so-called dynamic vaporizer. They use the features of horizontal air flows over the ocean. The fact is that at the surface of the water and at an altitude, the wind blows at different speeds. So with a seven-point storm, the wind speed at ten meters from the water is 15 m / s, and only 10 m / s – at a height of one meter. Given this factor, the petrel periodically rises and falls, gaining horizontal speed in the faster upper layers of air and vertical in the lower layers, due to a greater flight speed than that of the surrounding air.

And these are not the only tricks these seabirds use. Petrels (as well as albatrosses, seagulls and pelicans) during flight constantly balance on the windward side of the wave. And when the wave ends, the bird moves by inertia, looking for a new wave.

Therefore, the sailors did not have much choice but to drive the petrels out of the ship. From the deck without help they would not have taken off.