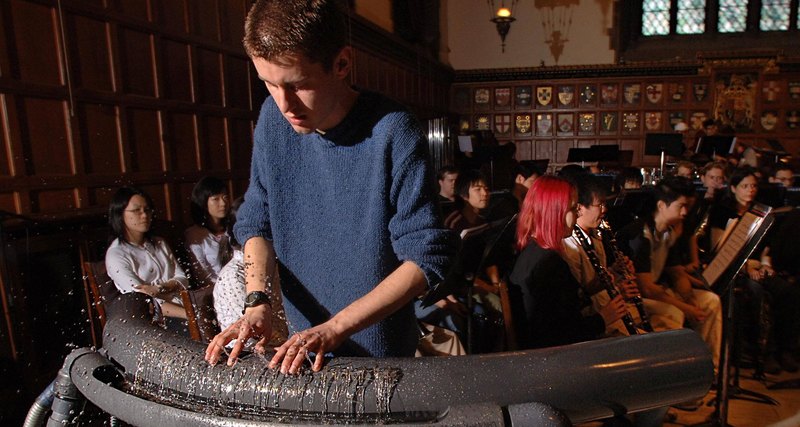 The university concert hall, the orchestra is preparing for the performance. Winds, percussion, but what is this unusual instrument with the edge – basins, water pumps, water pipe, and the whole floor in splashes per meter around? It’s a hydraulophone. The orchestra will perform the suite for the hydraulophone of musician-experimentalist Ryan Jenzen.

Hydraulophone is an amazing musical instrument that uses liquid for sound production. It differs from all known “water” instruments, because in them sound creates still air, and liquid is nothing more than the working body of a hydraulic mechanism that pumps air into the tubes. In the hydraulophone it is the fluctuations of the liquid – most often water – that create the sound.

The musician who plays this instrument has to deal directly with the liquid: to get notes on the hydrailophone it is necessary to cover the holes with the fingers, like in a recorder or a whistle, but trickles of water beat from the holes. Water tools are more convenient than their air relatives: in it each hole corresponds to one note, which allows you to take whole chords. For greater convenience, the notes are arranged in order, as on a piano, and the trickles of water flowing through the holes create even a kind of keyboard – wet and constantly moving. 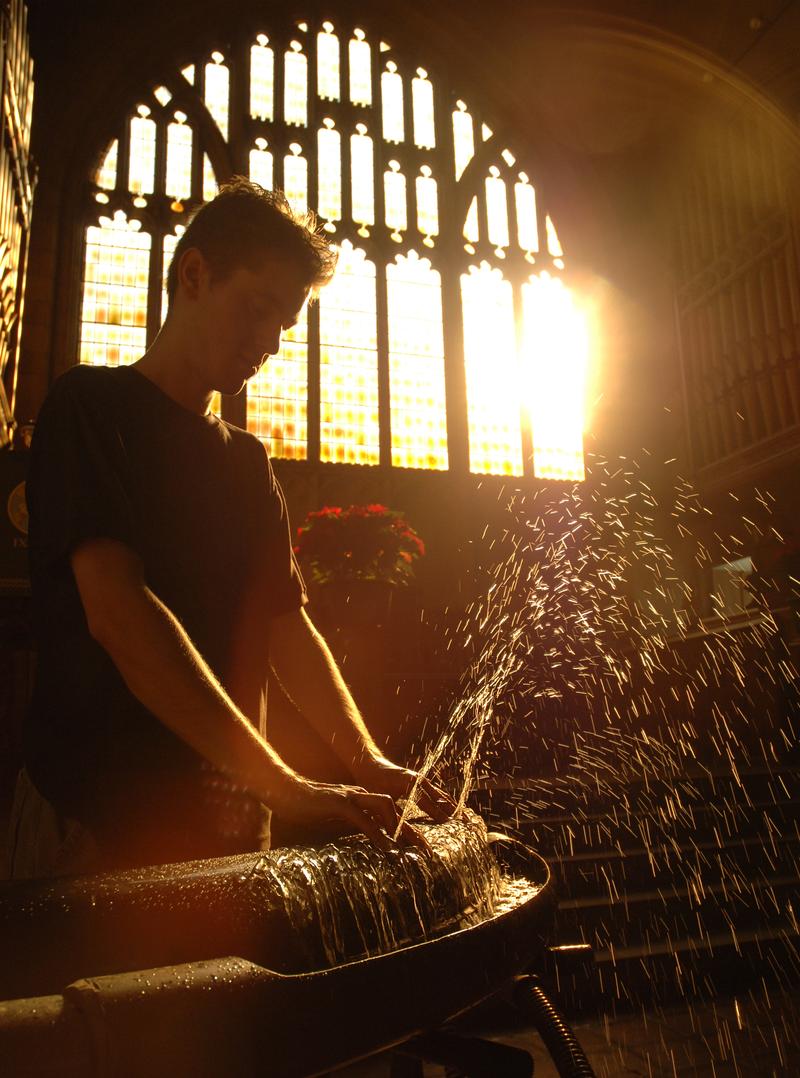 The founder of the hydraulophone Steve Mann – a Canadian inventor known for his wearable computers – has been engaged in unusual musical instruments for more than 20 years. “Funny plumbing sounds,” he says. “I’ve always wanted to learn how to use these sounds to extract music.” Starting with water from a garden hose (the prototype of a hydrailophone was called a “water horn” and had only one trickle to control the sound), Mann went a long way in research and created many models with a similar principle of action.

Using external similarity, hydraulophone is often called a water flute, but their similarity lies much deeper – in principle, the sound. When the performer with his finger deflects a trickle of water, the pressure in it rises, and some of the water from it is sent to a branch pipe leading to the sound-extractor inside the instrument, just as air is blown into the flute. In different models of the hydrailophone, labial tubes are used to produce sound, that is, small flutes, metal tabs, like in a saxophone, rotating perforated disks, as in a pneumatic siren, and other mechanisms that cause the fluid to vibrate at a certain frequency. 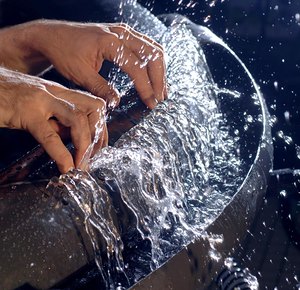 Hydraulophone is a very sensitive musical instrument. The sound of a note depends on how we interact with a trickle of water on the keyboard: we closed it, closed it or turned it aside (with full closure, the volume of the sound is maximal, since the entire stream is redirected to the pickup). In the electric version of the instrument, the musician controls the pitch, volume and timbre of the sound during performance, and he can individually vary each note of the chord (a rare property for musical instruments). Thus, you can play and accompany yourself simultaneously, whimsically sharing and twisting the main and secondary melodies.

Thus, the hydraulophone is a set of many monophonic “water flutes”, each of which the musician can control one finger, adjusting the volume of the sound.

The researchers went on and made an electric hydraulophone to make the slightest turbulence of the stream sound. To the sound mechanisms of each tricket, the simplest hydrophones were connected, with the help of electronic filtration they got rid of side effects, and the water keyboard became even more sensitive to the movements of the musician.

While the musician does not begin to interact with the “fountain” of a certain note, the water does not fall into the discharge tube. On the contrary, due to the movement of water in it, a vacuum is created.

Mann designed his instrument not only for musical activity, but also for entertainment – as a musical sculpture-fountain for installation in a public park. Stuck is very interesting: unlike wind instruments, in it we see trickles that create a sound, and we can touch them. In the simplest instrument there are only 12 notes, it is easy to learn how to play it, and even gamers deliver a great pleasure to the performer. Today, hydraulophones are installed in scientific museums and public places as fountains, and flocks of children are constantly flocking around them, wishing to play on an amusing musical attraction.

But serious concert copies take place in the orchestra pit. So, the orchestra is ready, Ryan Jenzen puts his hands on the tight trickles of the water keyboard, and they tickle the pads of their fingers. The first chords are heard.