If parallel universes exist, how to find proof? 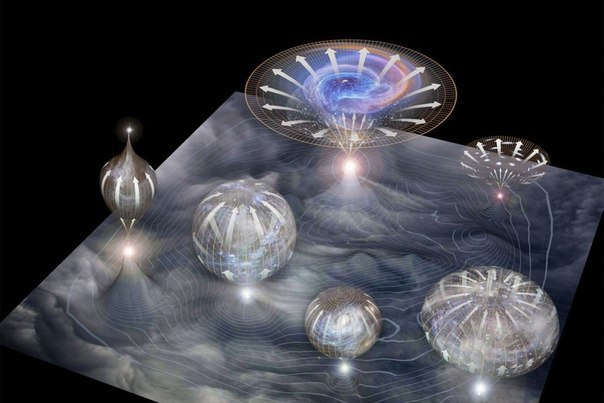 Imagine a physicist sitting in a cage with a gun aimed directly at his head. Every few seconds you measure the direction of spin of a particle in a random room. If the spin pointing in the same direction, the gun shoots and physicist dies. If another, then I only hear a clicking sound and physicist survives. It turns out, the chances of survival physics — 50 to 50, right?

All may not be so simple if we live in a multiverse — that is, except for our universe, which we call native, there are many others.

With the script with a physicist and a gun begins the famous thought experiment called “quantum suicide”, and this is one way to try to understand whether we live in only one of the many (and potentially infinite) universes.

This thought experiment relies on quantum mechanics and the idea that a single objective reality does not exist. Everything we see around us is only one of the possible configurations of all the probabilities of what will happen or another event. One of the interpretations of quantum mechanics is that all other sets of probabilities may exist in their own separate universes. So if you follow the thought experiment, given this interpretation, then when you measure the second particle, the universe splits into two, each of which will be your possible option of the occurrence of events: in which a physicist and alive in which the physicist died.

His survival is now linked to quantum probability, so it seems to be alive and dead at the same time — just in different universes. If a new universe splits every time a particle is measured, and the gun either fires or not, in one of those universes eventually a physicist will survive, say, during the 50 particle measurements. Compare this with thrown 50 times in a row with a coin. The probability that 50 times in a row comes up tails, is extremely small, but it’s there — chance tends to zero.

And if that happens, the physicist will understand that the multiverse is real, and in a particular case — in the described experiment physicist truly immortal, as the gun never fired. But he also will be the only person that knows that these parallel universes exist. And how many physicists will have to “spend” to find out for sure.

However, there are other, more reasonable version of multiple universes that are backed by math, and potentially verifiable.

“For some people, parallel universes — it’s like a jump through a portal to another world or something like that,” says Matthew Johnson, a physicist from the Perimeter Institute. — But this is different”.

The actual observed evidence for the existence of multiple universes would be difficult to find, but possible. And that’s how physicists plan to do it.

In fact, multiple universe theories there is quite a lot, and the multiverse of thought experiment with quantum suicide”, where every possibility becomes a reality, one of the most radical.

A physicist at the Massachusetts Institute of technology Max Tegmark offers to split the theory of multiple universes into four different types, that was easy to think.

Multiple universes are derived from the mathematical predictions of existing theories, and multiverse first level of predicted highly respected and important idea in physics: inflation.

What we mean by “universe”?

To understand the idea of multiple universes, we first need to define what we mean when we say “the universe”. Our definition of “universe” changed several times, for example, when we invented the first telescope and looked out into space and found out that the stars are not fastened to the sky on the nails, but the Earth is not the only one in space.

But the universe is much bigger than we can see through a telescope, says Johnson. Our universe is just a sphere of light, which was enough time to get to us. If we wait another billion years, we will see even more and our concept of the universe will turn again, he says, Tegmark.

Someone standing on a planet trillions of light years away from us, will have a very different picture “of the universe”, based on how much light fell on his planet.

We have no way to reach to these other bubbles of universes, by definition, because there is no way to travel faster than light. Although we can’t see, physicists believe that the traces of their birth can still be detected.

Where is the evidence?

The idea of inflation is that during the birth of our universe experienced a period of rapid expansion (the Big Bang) when nanometer space suddenly explodes into 250 million light years in less than one trillionth of a second.

After the start of inflation, it never fully stopped. In some regions of space-time it stops them in areas of space are transformed into bubbles like the one universe which we see around us, but in other places the space continues to expand. If the extension is infinite, and many did believe, that new bubbles of universes are formed continuously. It remains a bubble trail. We’re just drifting through space-time in the bubbly Jacuzzi universes.

Again, there is no way to contact these other bubble universes, because we can’t move faster than light. But theoretically, can you prove that they exist. And here is how.

When our bubble universe was formed for the first time, it is possible that she was faced with other bubble universes, which are formed around our. It is unlikely that we are still near them, because the ongoing expansion of space-time takes us farther and farther away.

However, the effect of early clashes could put ripples in the cosmic microwave background (the leftover heat from the Big Bang). Theoretically we could see these ripples with telescopes. She’d be bleached by the disk — like bruise on the body of the microwave background.

Jones is looking these “bruises”, but a lot depends on how quickly there are other bubble universes and how many of them can be. If bubbles a bit, we could do not to deal with them.

The space telescope Planck is currently listening to the skies in search of evidence of such collisions with other universes.

Different physicists have different theories of the multiverse. This version arises from string theory and the idea of existence of many other dimensions to which we simply have no access (as in a situation in which the hero McConaughey in the movie “interstellar”). Some physicists think that parallel universes are hiding in these extra dimensions.

This idea of the multiverse is also check.

This would be convincing evidence for string theory and parallel universes, and would also help to explain why gravity is much weaker than the other fundamental forces.

However, no serious evidence yet. Only doubt.

“I only believe what is confirmed by specific, verifiable experimental evidence, and the concept of parallel universes that can not boast,” says Brian Greene, a theoretical physicist from Columbia University.

The problem is, says Johnson, what physics are removed from philosophical discussions of multiple universes. Some just want to test the idea. Other radical and unverifiable theories. Tegmark, says will try to conduct an experiment with quantum suicide when old and weak. But let’s hope he’s just joking.