Ilon Mask showed the dimensions of an interplanetary ship 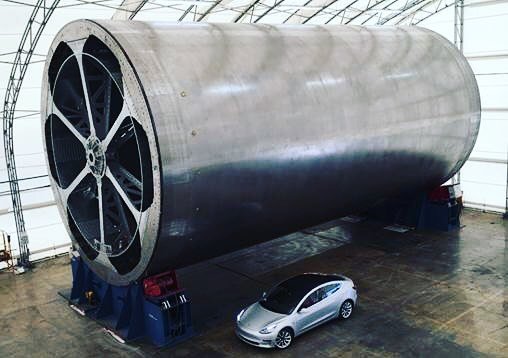 The founder of SpaceX company Ilon Mask demonstrated a model-template that will be used to assemble the main part of the interplanetary spacecraft. It will be launched by a huge rocket called BFR (Big Falcon Rocket).

A picture of Mask was unveiled on his page in Instagram. Next to the body is a Tesla car, which was placed in order for users to appreciate the future dimensions of the ship.

Recall that in 2016, Mask showed a huge fuel tank made of a composite for liquid oxygen. The tank was intended for a BFR rocket. Also earlier, the founder of SpaceX introduced several video clips showing the Raptor engines, however, photos of the hull of the ship have not been demonstrated yet.

It is assumed that the height of the rocket will be 106 meters. It will be able to take 150 tons of cargo to a low Earth orbit.

Earlier Ilon Mask reported on plans to send the first ship to Mars in 2022.