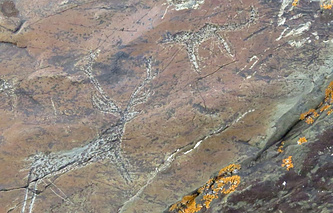 Unique ancient drawings ochre found in a cave near the village of Verkh-Muta Ust – Kansky district of the Altai territory. They depict horned antelopes, previously lived in the Altai mountains, these animals are now found only in Africa, reported the press service of the regional government.

In the cave there are drawings of animals, including horned antelope, which is now found only in Africa. These artifacts of the past found a local resident Mergen Sadykov and reported it to the Agency for cultural and historical heritage of the Altai Republic, after which the experts examined the cave. According to experts, it was a Parking, – the Ministry said.

According to the Director of the Agency for cultural and historical heritage of the Altai Republic Vasiliy Agnosia, in the Altai, according to the organization’s data, it is in the caves had not found such pictures – for example, horned antelope, painted with red ochre, possibly with iron oxide, was found for the first time. Previously, according to him, the region was known four points with ancient drawings.

For example, in Denisova cave being excavated, studied cultural layers and traces of human activity, but there are no drawings. At the entrance there are some drawings in the cave, Ilicak, but not in itself. According to local residents, in the cave where he found the images horned antelope, literally 30 years ago were drawings of men, but I couldn’t find them, suggest that in recent years there climbing goats, they could hurt rubbed against the wall, found one picture of a modern letter M – the tourists there were. The local population in General about the cave knew, but no one attach importance to this point, you can not know where to go, explained Oynasi.

For example, in the Ust ‘ -Kanskaya cave age of the cultural layer consists of more than 40 thousand years. To determine the age of these new figures we have not yet taken – may be 40 or 20 thousand years, but it needs professional archaeologists, there is need to dig. In the future maybe someone will be interested, we are still not reported to archaeologists will notify in the near future, we will be glad to help them, try to create the conditions added Oynasi.