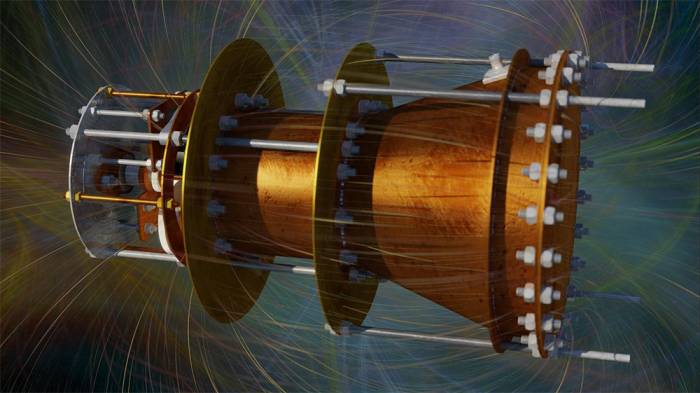 Some real physics might be behind a fantastic project impossible EmDrive engine and why it might be associated with the history of the Universe before the Big Bang.

According to the American Institute of Aeronautics and Astronautics, which publishes the journal of Propulsion and Power, there is adopted the article on EmDrive electromagnetic motors. Moreover, she even has already passed scientists reviewers and will be published before the end of this year. Let’s call a spade a spade: the news sounds the same as if the Institute had announced that the Earth has swooped down on the celestial axis. The fact of such publication is a scandal, and here’s why.

The laws of physics are merciless, that something was moving forward, it must push back. We start from the ground under his feet, the spacecraft — in the absence of the firmament — back fuel. Because of this, the journey to the moon, yet requires hundreds of tons of fuel per person. In this situation about the flights to more distant bodies, even to think terribly. Delivery of one ship to Mars and back costs as mesages. A nuclear reactor, but it means is that the United States, which such technology is just not there. We have, for example, they are in much better form. But no money for real flight to the red planet, even in such a cheap option. And to the (as yet hypothetical) flight of the Americans, they are unlikely to appear.

It is clear that from such hopelessness with long space flights, some start to see colored dreams. One of them was engineer Roger Scheuer. In 2003, he took a copper bucket, put it in the magnetron from a household microwave and said that he had created an engine that provides thrust, holding back nothing. He explained that at first the fact that the bucket allegedly maintains a standing wave of electromagnetic oscillations in a closed cavity. Wave, they say, is the source of thrust. From a physical point of view it makes no sense. Try to get into the inflatable pool and get the cravings, moving the pool, producing it a wave.

Theoretical physicists only laughed at such statements. However, physicists-experimenters decided to go beyond simple osmeivaya and verify the claims shayera in practice. And then the trouble began. Thrust was created, and any attempts of experimenters to find the sources of error in the measurements did not give results. The apotheosis in this regard was the work of Martin Tajmar (Martin Tajmar), head of the German Institute of aerospace engineering at the Technical University in Dresden. In the world of experimental physics this man is known as a professional destroyer of legends, the rigorous formulation and verification of the experiment are able to find almost any bug.

When he didn’t make it, worried even theoretical physicists. The concern they expressed is quite peculiar: EmDrive — full …Sean Carroll of Caltech). Someone made the effort, nevertheless, expressed the same opinion softer: due to the lack of theoretical explanations for the violation of the law of conservation of momentum reviewers in magazines will not accept such work, ” said Eric Davis of the Institute for advanced studies at Austin (USA).

In this respect, that the people of NASA for their testing EmDrive, has passed the stage of peer review in a decent journal, it sounds revolutionary. This would not have happened if the detected paper error. Obviously, evidence of the health of the device was so severe that even the respect for the law of conservation of momentum is not allowed to kill job. So, it’s time to bury the law? Let’s face it: hardly.

While conventional acceptable from a scientific point of view, the explanation cannot be the engine. NASA in response to the question of why it works, begin to talk very questionable things. For example, about the fact that the engine starts from virtual particles. Yes, modern physics believes that vacuum constantly emerging and disappearing virtual particles. Particles appear and disappear so quickly that they don’t register. However, the well-known Casimir effect shows that they can give the real attraction of the two close plates in the void. One bad — to the bucket, Saara all this does not apply. Virtual particles do not have clearly fixed position in space, and coupled with other factors, it does not give them a start.

However, more recently, appeared another explanation of the operation of the engine impossible. Nominated him Nicholas gorkavyy from the Greenwich Institute (USA), already known to us in very exotic hypothesis about the origin of the Universe. As we remember, the physicist suggested that in the last cycle of the Universe that was shrinking until it became all black holes. During each cycle of the merging pair of black holes loses about 5-15% of the mass going into gravitational waves. Therefore, multiple mergers in the past the Universe was supposed to turn into a wave almost its entire mass. The universe from which the bulk so tragically lost, dramatically impoverished in terms of gravity. Because of this anti-gravity compression gave way to extension — and there was our universe. According to the hypothesis Garkavogo, only part of the energy of those relict gravelyn went to the formation of the substance of our Universe, a significant portion is still out there somewhere. We do not see it only because these high frequency waves, and yet our detectors can register only the low-frequency gravitational waves.

Well, that is know how. For Horikawa, bucket cholera is accidentally built the first detector relic gravelyn. Under his hypothesis, the level of energy of relict radiation is not bounded above and can be very high. The scientist believes that EmDrive found the background of high-frequency gravelyn and draws out the energy for its thrust. He then works as an antenna, which due to a resonance is sensitive to vibrations from relict gravelyn gigagertsevyj frequencies. In this case, it is impossible the engine is not a closed system with a standing wave, and the open, going from the waves of a whole sea of gravelyn. This does not mean that it will give fantastic traction: to enter the copper cone in the resonance, also takes energy. And to really optimize the device while no one tried (how to debug to understand?). But because of the use of external waves, he really do not need a release of fuel. If so, then the prospects of such engine for all its weaknesses is huge. According to calculations, the earth probe to Pluto would have reached this planet with EmDrive on Board for 18 months, but not for many years. Today, terrestrial space travel billions of miles for months can’t even dream of.

While this is the only explanation of the theory behind EmDrive, not subjected to serious theoretical criticism. However, all could be in the future — because the hypothesis itself Garkavogo only really begins to be discussed in the scientific community. Fortunately, it seems that there is a way to verify right or wrong in the case of impossible engine. EmDrive want to experience in space, on Board a small satellite. Such tests cannot be questioned. On Earth check traction can always be attributed to error of experiment. But in space, the camera or deviates from the base path (from point a to point B), or is it. If you happen to first interact with gravidynamic relic from a past Universe may be not-so-exotic explanation impossible thrust.