In a human body the new heavy-duty antibiotic is found 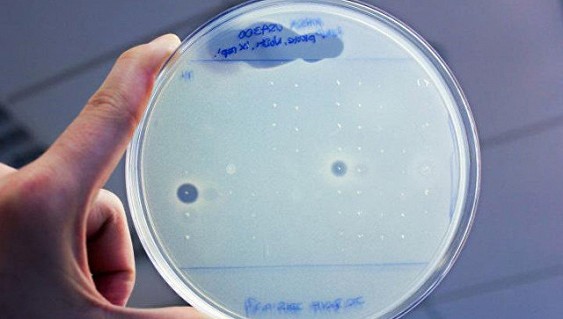 The computer analysis of DNA of the bacteria living on our skin and in an intestine helped scientists to allocate two potent antibiotics – gumithine A and gumithine B which will help to fight against still impregnable “superbacteria”.

“These antibiotics can work as peculiar “amplifier” for other drugs. Their action on chains of synthesis of the vital substances in microbes can be compared to as though you took a hose and pressed it in two places. Neither the first, nor second crossclamping can’t stop completely water flow in itself, however their combination gradually stops a stream” — Sean Brady from university Rokfellerov (USA) tells.

Emergence at bacteria of fastness to antibiotics forces druggists to frame all new and new types of medicines. However microorganisms mutate very quickly therefore among them quickly enough there are strains, impregnable for dangerous drugs. If the mankind ceases to invent new antibacterial drugs, the existing antibiotics will become simply useless soon.

Around the world really advanced scientific centers deal with a problem of fastness to antibiotics, but put this difficult. A game in “tag” with microbes — you to them a new antibiotic, they to you through some time fastness — runs into money: development of a new antibiotic costs from 800 million to one billion dollars today, and leaves on it usually 8-10 years.

Go and his colleagues considerably reduced the price and accelerated this process, having developed an unusual technique of the computer analysis of genes which allows to find in virtual DNA of microbes and multicellular living beings of the sequence which can be bound to production of the molecules capable to destroy disease-producing bacteria.
Scientists tested work of this algorithm on the most studied set of genomes of bacteria – a human microbiome, set of DNA of the microorganisms living in our intestine and on a skin surface.

Having analysed thousands of genomes of the bacteria living in our organism Go and his colleagues allocated six tens genes which “reading” has to force a cell to synthesize the molecules similar on structure and a form to antibiotics. Having selected the most successful half of them, scientists synthesized proteins, instructions for which assembly contained in these genes, and checked their work on colonies of colibacillus, a golden staphilococcus and other dangerous microbes.

As it appeared, two of them which received names gumithine A and gumithine B were especially effective in fight against bacteria, destroying not only the “usual” strains of a staphilococcus, streptococcus and colibacillus, but also their version resistant to action of usual antibiotics. Both of these proteins destroy microbes, suppressing enzymes which they use for “repair” and construction of the cellular walls.

Scientists checked operability of these antibiotics, having infected several mice with the lethal dose of a staphilococcus steady against action of usual drugs. Rodents who received after that portions of medicine on the basis of gumimitsin and traditional antibiotics, successfully endured an infection whereas all individuals from control group died.

What is interesting, rodokokka bacteria in which these substances were found, under natural conditions “hide” them and don’t synthesize these antibiotics at their cultivation in a test tube. In the nearest future Go and his colleagues plan to continue searches of such molecules in DNA of other microbes, hoping to fill up our arsenal in a race of arms with illnesses.