In Alaska, found the skull of a giant bear from tales 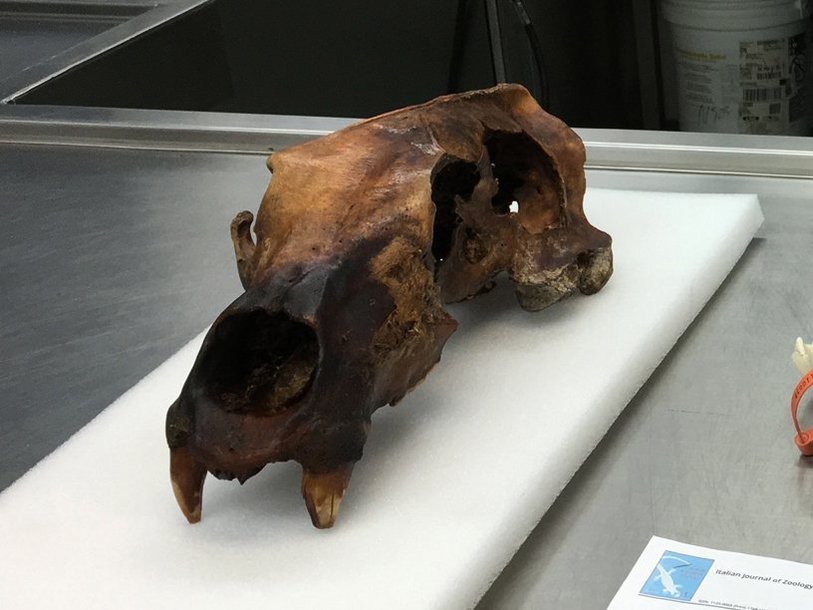 In the course of excavations on the North coast of Alaska was found unusually large skull of a polar bear, which was probably connected with the legends about a particular type of polar bears, known to the Eskimos of idiotov.

Published in 2015 a study of the role of polar bears in the life of the Inuit referred to local unusually large polar bear with an elongated than other bears the body that have never come across a scientist. The Inuit say that it is found very rarely in the life of the hunter may see him only once or a few times. Length it can be 11 – 13 feet (3,35 – of 3.96 meters), whereas the body length of a regular polar bear does not exceed two and a half meters.

The proportions of the body he recalls a local resident of ermine, therefore the group of dialects of inuvialuktun it is called “bear-ermine”: tiriarnaq in the dialect of sigleton, tigiaqpak in the dialect of kangerluarsuk. The name is derived from the word tiġiaq “ermine”. In English, the Inuit call them weasel bears. As explained by a resident of the village Paulatuk, the bears, turning the head, can not quickly deploy all of the body, while the polar bears (stocky bears) more deftly turns on the spot. This feature brings giant bears with ermine, which in turn also requires additional space due to the elongated body.

Description of “bear-ermine” are slightly different. Some say that he’s fat, the other did not confirm this, believing it to be thin but large. Some hunters believe that all “bears weasels” males. But all descriptions are large, oblong, narrow head and a long neck.

Memories of encounters with “bears-weasels” are, as a rule, by the late 1970s – early 1980s. The banks island and in Amundsen Bay, in the administrative district of Inuvik in the Northwest territories of Canada. 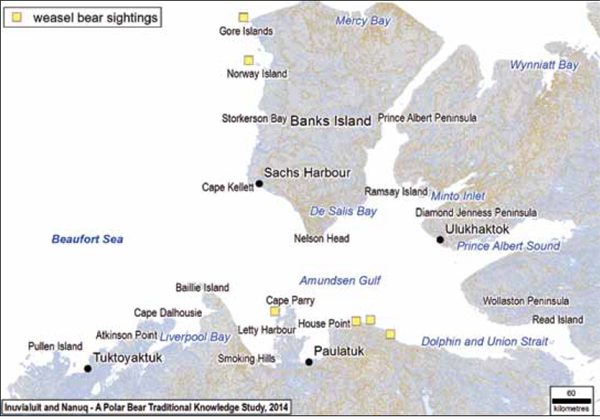 Where, in the words of the Inuit met the “bear-ermine” (Inuvialuit and Nanuq: A Polar Bear Traditional Knowledge Study. 2014)

Discovery, which first forced to take these stories not as a folk legend, was made somewhat to the West, on the coast of the Chukchi sea near the Alaskan town of barrow (Utqiagvik, Utqiaġvik) – almost at the northernmost point of the United States. Place in thirteen miles South-West of Utqiagvik known as the Parking Welaka (Walakpa). In 1968 – 1969 expedition Dennis Stanford from the Smithsonian institution unearthed there artifacts related to the ancient culture of birnirk (600 – 1300).

In recent years, due to the beginning of thawing of permafrost soil in the Arctic coast are prone to destruction under the action of the sea. At the end of summer 2013 part of the coast in the area collapsed, washed away by the storm, and exposed the remains of an ancient wooden buildings. To fully explore it, archaeologists are unable due to adverse weather conditions and lack of funding. 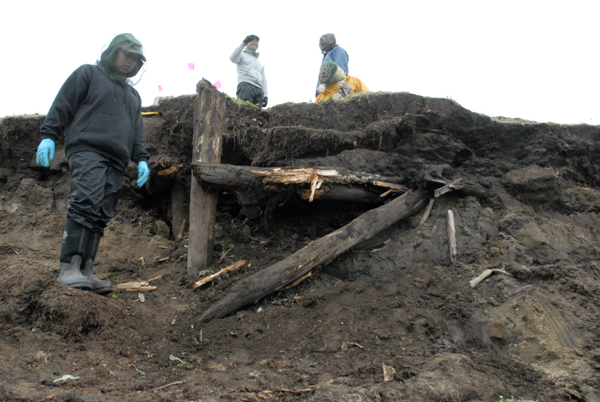 Timbers of a house are exposed at the Walakpa site southwest of Utqiaġvik following a storm in late summer of 2013. The discovery prompted renewed excavation following a hiatus since work was last conducted there in the late 1960s.

Fragments of wooden construction, exposed in 2013

In 2014, there was another destruction of the soil, and a local resident discovered the skull of a polar bear. Archaeologist Anne Jensen (Anne Jensen) were able to find the means to conduct a full excavation in this place for three months the summer of 2016. Although part of the wooden buildings by this time disappeared, archaeologists have discovered a number of artifacts, as well as four mummified bodies of seals preserved thanks to the permafrost.

A panoramic image shows the eroding Walakpa site as it is excavated this past July southwest of Utqiaġvik. (UIC Science)

The excavation area Welaka in 2016

As for the skull, it is much larger than the skulls of their modern counterparts, and a number of features different from them. It is narrow, with an elongated nape and a number of features of the nasal bones. Radiocarbon Dating showed that the bear lived 670 and 800 years. It is the oldest complete skull of the polar bear, found in Alaska, so the researchers nicknamed him Old (The Old One). 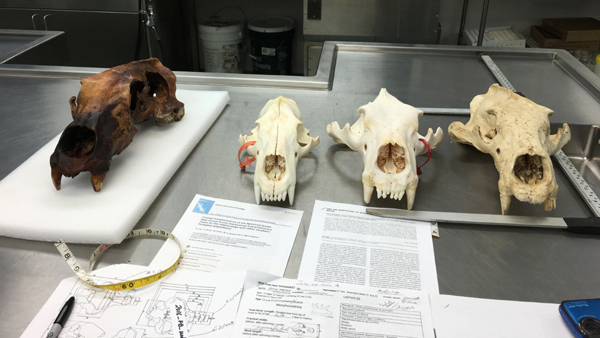 A huge, fully intact and unusually shaped polar bear skull, left, emerged in 2014 from an eroding archaeological site southwest of Utqiagvik. It is one of the biggest polar bear skulls ever found — and quite different from most modern polar bear skulls, right. It is slender, elongated in the back and has unusual structural features around the nasal area and other areas. (UIC Science)

Found the skull (left) and skull the other polar bears

Anna Jensen plans to use genetic research to establish how far the owner of this skull from other polar bears. Meanwhile, scientists believe that it may be representative of a distinct subspecies or biogeographical race. Nor is it clear how common such large bears, and how long they existed. It is noteworthy that the proportions of the skull correspond to the descriptions of “bear-weasel”, recorded from the Inuit of Canada, but we must remember that the skull is separated from the described meetings with a giant bear more than a thousand years.

Paleontologists currently known giant subspecies of polar bear (Ursus maritimus tyrannus), but he lived in the late Pleistocene, that is about 70 thousand years ago. And not in the American Arctic, and in present-day England. Described it was in 1964, only one ulna found in the sandy deposits of the Thames near London bridge, Kew. The bone had 48.5 inches in length, which allowed Finnish paleontologist björn Kurtenok (Björn Kurtén) calculate that the size of the body of the bear could reach the four-meter length and height of 1.7 meters. That is, it is much superior to modern polar and brown bears. 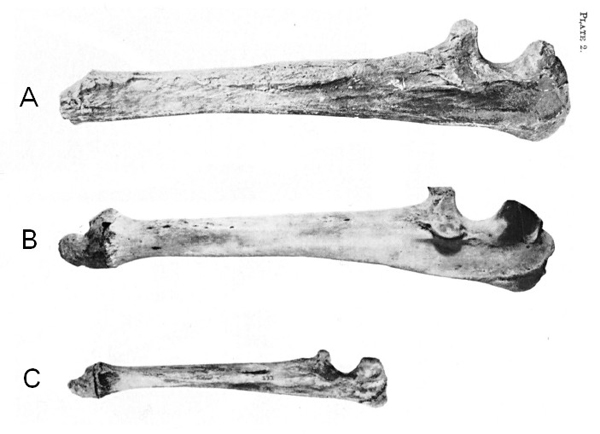 Comparison of the ulna giant white bear (A) polar bear (B) and brown bear (C) from the work of Kurtén, 1964. The evolution of The Polar Bear, Ursus maritimus Phipps

Scientists believe that a giant polar bear as a modern polar bear, descended from one population of the brown bear, separated from relatives by the onset of the glacier. Its range was seized, apparently, not only modern England, but also the more southern regions of Western Europe. This subspecies is switched to the power only meat animals, hunting large herbivores, which in the Pleistocene was quite a lot. A large amount of fat allowed him to better endure low temperature. Some researchers believe that he was not a subspecies of the white, and the brown bear