In Australia, birds were found with wings darker than the night 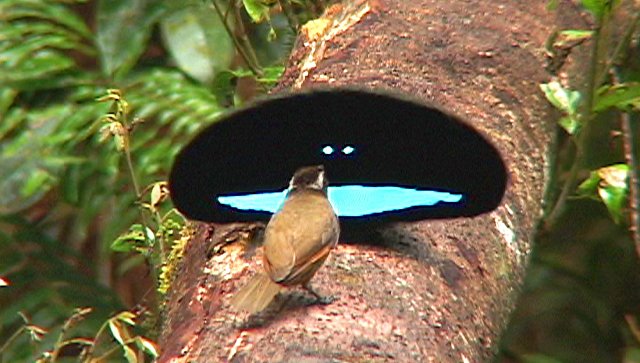 Some species of birds of paradise have a unique “nanotechnological” tail, which absorbs 99.95% of light and looks more black than any other natural dark material on Earth, according to an article published in the journal Nature Communications.

“The vertical beads and hooks on the black feathers of the birds of paradise are lined up in such a way that they create very deep and curved cavities, from which the light can not escape.” Interestingly, such feathers are present only next to bright spots of other flowers, suggesting that males birds of paradise use them to attract the attention of females – “charcoal black” deceives their eyes and makes these color spots shiny and bright, “write Richard Prum of Yale University and his colleagues.

In recent years, scientists are actively creating and studying the properties of so-called metamaterials – artificial structures from a variety of individual pieces or nanoparticles that can interact in an unusual way with light or other forms of electromagnetic radiation.

Metamaterials, as physicists now believe, will form the backbone of ultra-fast light computers of the future and other futuristic gadgets.
Strictly speaking, metamaterials are not the invention of man – similar to them crystals and structures occur on the wings of many butterflies of “metallic” color, on the shells of many other insects, the wings of birds and even in the famous blue folds on the muzzles of baboon-mandrills.

Prum and his colleagues added several species of birds of paradise in the forests of Australia and New Guinea to the number of such “nanotechnological” living beings, having studied the structure and physical properties of their plumage.

As a rule, in the populations of these birds, males are much larger than females, which forces them to constantly compete for the attention of the fairer sex. The key role in these courtships is played by their feathers, which are formed in very beautiful patterns at a time when the suitor performs his dance before his future wife.

Studying the black feathers of these birds surrounding these bright spots, scientists have noticed that they do not turn pale and do not turn silver or gray when separated from all other plumage, as happens with the feathers of ordinary crows, their Australian “cousins” and many other birds.

Interested in this anomaly, scientists enlightened the feathers using a scanning electron microscope and a particle accelerator, trying to understand whether there is an analog of metamaterials inside them, and also measuring their reflectivity.

To the great surprise of scientists, feathers of birds of paradise can compete with the ability to absorb light with the blackest artificial materials that were created in recent years from nanotubes and other nanoparticles to cover photosensitive matrices of telescopes, cameras and camouflage systems. According to the current estimates of Pruma and his colleagues, the feathers of birds of paradise absorb about 99.95% of light, which is slightly less than that of Vantablack (99.965%), the blackest material on Earth.

Such natural nanomaterial works because the beards and hooks in the feathers of birds of paradise have an unusual shape, similar to dried oak leaves, and are inclined towards the beards, “branches” of the feather, at a certain angle. As a result, special areas of emptiness appear inside the pen, where light can penetrate, but can not escape.

Interestingly, the evolution in this case decided to “save” and made only the upper part of the feathers of paradise birds completely black. If you cut off the tips of their beard and remove the hooks and beards of a particular shape, the feather will lose its charcoal black color and become even more colorless than ordinary black feathers.

Scientists believe that copies of such structures can become worthy competitors for already existing “absolutely black” nanomaterials, which can reduce their cost and expand their use in everyday life and industry.