In Australia, rescued about a hundred dolphins that washed ashore 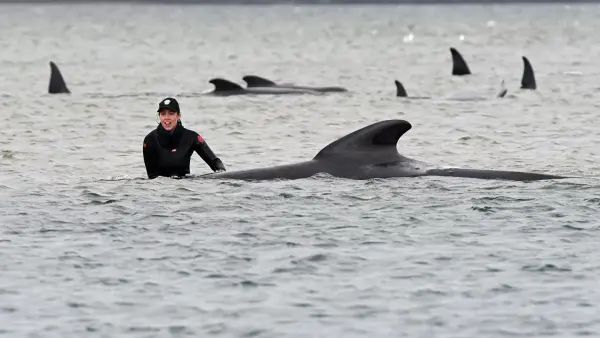 At least 94 black grind dolphins have been rescued from the shallow waters off the west coast of the Australian state of Tasmania and released into the sea, ABC reported.

The operation to rescue the surviving dolphins has been going on for several days. Dozens of rescuers and volunteers are involved in it. By Thursday evening, the number of individuals rescued had risen to 88, six more were rescued on Friday morning. Authorities are reportedly hoping to save 12 more dolphins.

As biologist Chris Carlyon said earlier, the number of dolphins stranded ashore was a record for Tasmania.

Experts are still trying to establish the cause.

Grindas, or black dolphins, are marine mammals from the order of cetaceans. The body of the grind, reaching a length of 8.5 meters, is completely black, except for a white spot under the chin in the form of an anchor. The dolphin weighs on average 800 kilograms, but there are also individuals weighing more than 2 tons. Various types of grind live almost all over the world – both in warm tropical seas and off the coast of Northern Europe.
Whales and dolphins are often washed ashore. This mainly occurs during the summer months when schools of mammals migrate into Antarctic waters or return from there past the coast of the island nation. As a rule, if one grind is washed ashore, others try to help her and end up sharing her fate.