In Britain, its “Atlantis” rose from the bottom of the sea 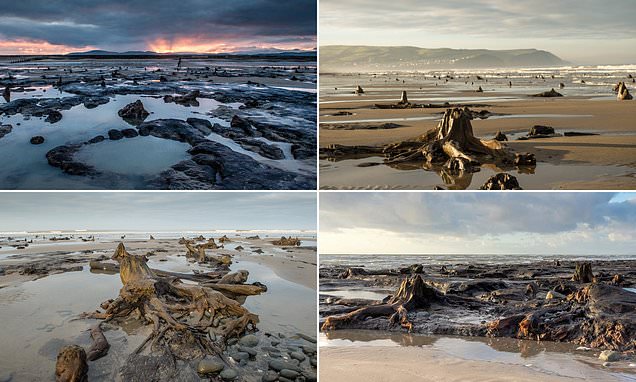 In Great Britain, the powerful hurricane Francis exposed an ancient forest that “sunk” in Cardigan Bay more than 4,500 years ago. Until now, this event was considered only a legend.

According to BBC News, several ancient fossilized trees were discovered by eyewitnesses at Llanrichstad Beach. They were found after Storm Francis hit Wales in August.

The researchers who have visited the site have already established that the forest literally “risen” from under the water has spent 4500 years in the sand on the seabed. Moreover, scientists do not exclude that the age of some trees may be even older – now tests are being carried out to accurately determine the age. It is clarified that the found forest is located about 21 kilometers south of the town of Llanrichstud in Wales.

The find aroused interest also because the discovered forest immediately became associated with the myth of the 17th century about a sunken civilization, the Atlantis of Wales, known as the Sunken Hundred. According to legend, this kingdom was swallowed up by the sea after Seytenin, the guardian of the naval defense, forgot to close the gate.

Science knows several versions of this myth. According to one of them, this forest extended over 35 kilometers west of Cardigan Bay. Incidentally, in a later version, the watchman assigned to watch the gate is described as a drunkard. It is the strong intoxication that explains in the legend that the kingdom perished.

Commenting on the find, British historian Gerald Morgan noted that a huge number of fossilized trees had been discovered earlier along the entire coast of Wales. This time, the storm helped find a forest that scientists did not know anything about before.