In China, found the skeleton of a bird-like dinosaur 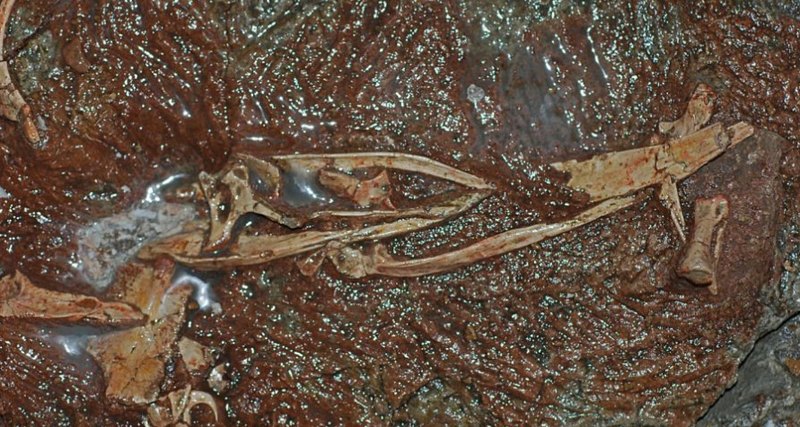 A joint US-Chinese expedition found a petrified skeleton of a reptile similar to a bird in the Xinjiang Uygur Autonomous Region in the west of China.

The reptilian vein at the beginning of the Cretaceous, that is, at the time when the birds on Earth were already there. In other words, it is not the ancestor of birds. The more interesting is the combination of reptilian and avian characters in its skeleton. Thin and short forelimbs, obviously not adapted to any participation in the movement, are adjacent to the general proportions of the skeleton and, especially, of the hind legs, indicative of adaptation to rapid running.

The new species, called Xiyunykus pengi, belongs to the group of alvarezaurs – fossil reptiles, whose remains were first discovered in the sedimentary rocks of Argentina in the early 1990s. Relatively small (about 20 kg) animals were adapted to fast running and climbing over obstacles. Alvarezavri ate, most likely, all kinds of small animals and carrion.

A typical sign of these animals, except for a specifically arranged skeleton, are small teeth, also reminiscent of toothy birds of the Cretaceous period, such as ichthyorinis.

However, the alvarezaurs did not always look that way. Early members of the group had long forelimbs and normal “predatory” teeth. And then their evolution took a bizarre path and in the anatomy typical bird features showed up, which, however, had nothing to do with the birds that appeared much earlier.

As the authors of the discovery emphasize, their finding is interesting precisely this: an illustration of how different groups of organisms develop similar features in the course of their development.

The specimen found during life was a “teenager” about 9 years old and 15 kg body weight.