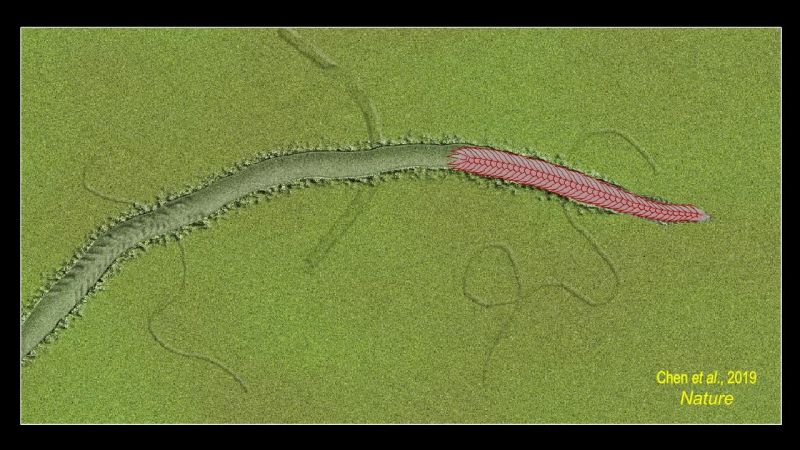 Scientists from China and the United States have found petrified traces of the movement of the ancient “wood lice”, whose age is 550 million years. The find confirms the hypothesis that earthly organisms began to move precisely in the Ediacar period, that is, 635-539 million years ago. An article about the study was published in the scientific journal Nature, a brief report on this by the Xinhua News Agency.

About the size and appearance of the ancient organism (the authors called it Yilingia spiciformis), scientists can only speculate on subsequently petrified tracks that remained from the movement of the animal. In total, scientists found 35 such tracks. Judging by them, Yilingia spiciformis was like a wood lice: its bilaterally symmetrical body consisted of approximately 50 segments of the same type. The width of the animal was 0.5-2.6 centimeters, the length could reach 27 centimeters. Each segment consisted of one central part and two lateral.

Also, the find is the first material evidence that animals at that time could already move. Previously, paleontologists only assumed this, since the petrified remains of the body of animals of that period were not preserved. The reason for this presumably is that the organisms did not have hard coatings and decomposed too quickly after death.


‘So, according to scientists, an ancient animal moved’

Scientists argue that their discovery “will reveal the key mysteries of evolution” of such creatures. According to experts, during evolution, such animals gradually transformed, contributing to the expansion of species diversity on Earth.

Yilingia spiciformis belonged to bilaterally symmetrical animals (Bilateria) – a group to which 99% of currently known organisms belong. According to the generally accepted version, all bilaterally-symmetrical animals descended from a common ancestor who lived on our planet 600-500 million years ago. Scientists believe that such creatures had a rather complex physiology.