In Egypt, discovered a statue of Ramses II 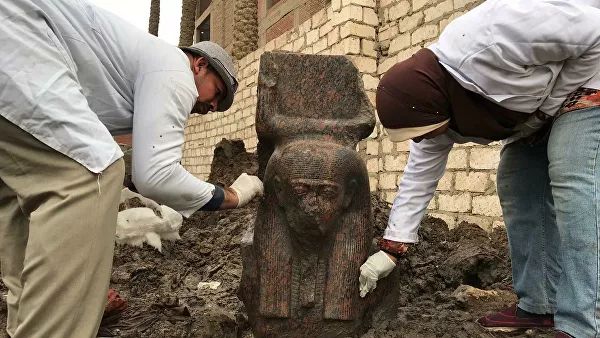 Egyptian archaeologists have discovered the top of the statue of Pharaoh Ramses the Second in the area of ​​Mith Rahin in Giza near the temple of the ancient Egyptian god Ptah, the ministry said.

“The upper part of the rare statue of Ramses the Second made of pink granite in the form of” Ka “has been discovered, which symbolizes strength, vitality and a hidden soul,” said Mustafa Waziri, Secretary General of the Egyptian Antiquities Supreme Council. According to him, a similar statue of one of the pharaohs of the III dynasty had already been found, but it was made of wood.

The height of the found fragment of the statue is 105 centimeters, the width is 55 centimeters. Above the head is the symbol “Ka” in the form of raised hands, which can symbolize strength and vitality.

The statue of the pharaoh was found in a private territory, the owner of which secretly conducted excavations, but was detained by the tourist police in early December. Now the find has been sent to the nearby open-air museum, where it will be restored.

It is believed that Pharaoh Ramses the Second, who ruled around 1279-1213 BC, made Egypt a great power thanks to his victories, conquests, development of new territories, successes in construction and irrigation.