In Egypt, found a new mummy and sarcophagus 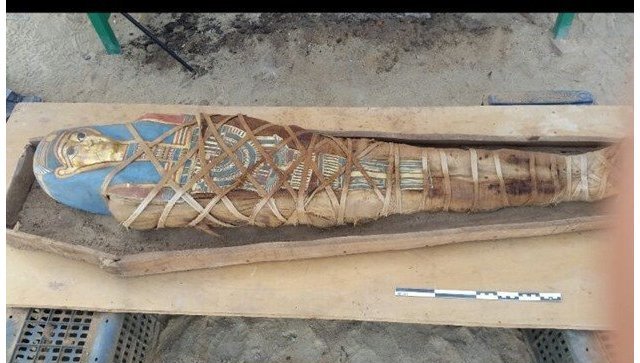 Archaeologists from the Institute of Oriental Studies of the Russian Academy of Sciences and their Egyptian counterparts discovered the ancient Egyptian sarcophagus and mummy buried in the Dare el Banat monastery in the Fayum Oasis in the Foyum Oasis, the press service of the Egyptian Ministry of Antiquities reported.

“The mummy is in good condition and its linen funeral shroud was not damaged, its head covered with a mask of compressed papyrus covered with gilding and blue paint, depicting the sky god Khebre, and the breast of the mummy is decorated with the image of the goddess Isis,” said Mustafa Waziri , head of the Egyptian Supreme Council for Antiquities.

The Russian archaeological mission is excavating in several regions of Egypt – in the ancient capital of Memphis, in the seaside of Alexandria, in the south of the country in the suburbs of Luxor. But the real luck came from the archaeological research of the oasis of El Fayoum, hundreds of kilometers south of the Egyptian capital.

This area since ancient times was considered the breadbasket not only of Egypt, but also of Ancient Greece and Rome – the harvest here is collected twice a year. Pharaohs of the 12th dynasty even moved the capital closer to this oasis when the rest of Egypt was covered by a severe drought. The highlight of El Fayoum is the freshwater lake of Karun, which, according to researchers, during the time of the pharaohs, was much more full and allowed to create a whole irrigation system. 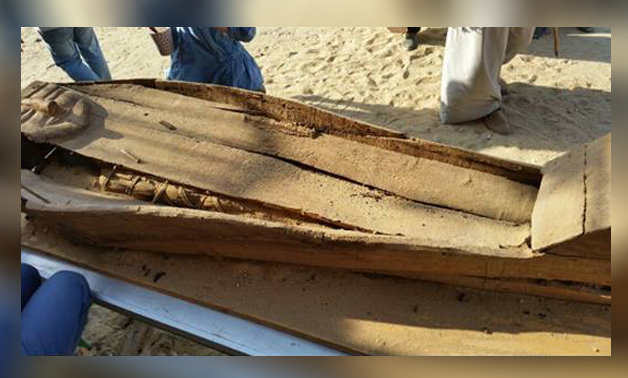 Sarcophagus, in which the mummy was found in Fougue

Russian archaeologists led by Galina Belova from the Institute of Oriental Studies of the Russian Academy of Sciences in Moscow have been excavating an ancient necropolis for more than seven years, at the site of which the Coptic monastery of Deir el Banat was built. This area has already begun to explore Egyptian archaeologists in the past, but now their business is continued by the Russians.

Another rich find of Russian and Egyptian archaeologists was the rich mummy of an ancient Egyptian, found inside a severely damaged sarcophagus, but still quite good. As the scientists note, they have already “rendered first aid” to the remains and protected them from further destruction during transportation to El Fayoum, where the mummy and remains of the coffin will be thoroughly studied by Egyptologists.

Further study of the mummy will help clarify the date of its burial, allegedly fallen under the dominion of the descendants of the Hellenic conquerors of Egypt, and reveal other secrets of her life and burial.