In Egypt, the tombs of the poor people of Cleopatra 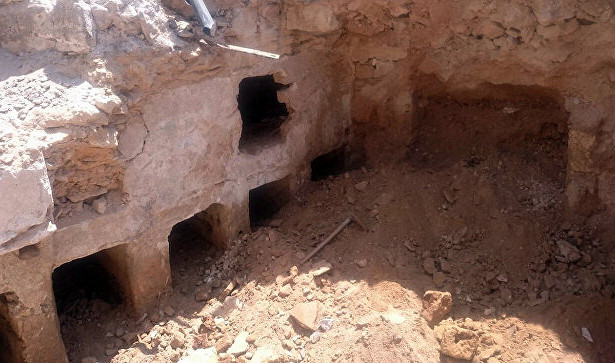 Egyptian scientists unearthed in the western part of ancient Alexandria several previously unknown stone tombs of the late Ptolemies, carved into the thickness of the rocks. Their first photos were presented on the website of the magazine Luxor Times.

“These tombs were used for a very long time by the ancient Egyptians, most of whom were apparently poor, whose walls were covered with calcareous mortar and partially painted, with part of the tombs being rebuilt, opened and expanded, indicating that they were used by several generations of residents Alexandria “, – says Aiman ​​Ashmawi (Aiman ​​Ashmawi), one of the participants in the excavations.

His team, as the archaeologist notes, opened a huge segment of the ancient cemetery during the excavations that Egyptian scientists conducted at the site of the construction of a new railway to the west of the city, whose predecessor was partially destroyed in the 1930s during the Second World War.

The Tomb of the Late Ptolemaic Age, found near Alexandria

At this point they managed to find several architectural complexes, built at the time of Cleopatra and other late Ptolemies. Each of them was a set of several small tombs carved into the thickness of the rocks, and a more spacious common room, where the entrances to these tombs were located.

Inside these premises archeologists found several hundred artifacts, including a large number of earthen vessels decorated with various patterns, as well as lamps, glass utensils and many other traces of civilization. The remains of the inhabitants of ancient Alexandria also survived, but many of them are now in critical condition because of the bombing and construction of the railway in the first third of the 20th century.

In the near future archeologists will take out most of the artifacts and remains and try to protect them from further destruction.