In England, discovered the remains of the ancient “direct” ancestors of man 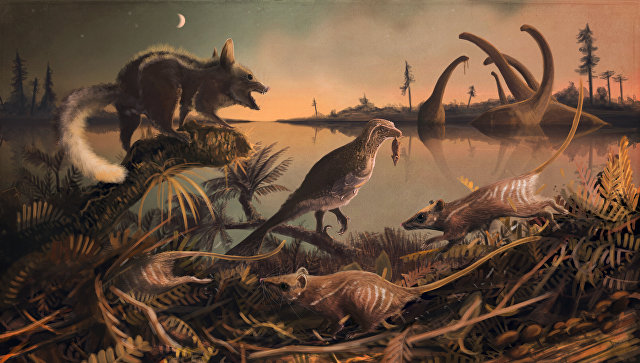 Paleontologists found in southern England the remains of a small rat-like creature that lived on Earth about 145 million years ago, in the era of dinosaurs, and is today the most ancient kind of human race.

“My graduate student, Grant Smith, studied the early Cretaceous rock samples collected on the coast of Dorset County, hoping to find something interesting in them.” Unexpectedly, he managed to find not one but two fossils, a pair of extremely amazing teeth that had never been before I did not meet in rocks of this age, when I looked at them, my jaw dropped, “said Steve Sweetman of the University of Portsmouth in the UK.

As the scientists say, the alleged ancestors of man and chimpanzee, our closest relatives today, were divided approximately 8-9 million years ago. The first representatives of the genus Homo, as paleontologists now believe, arose about 3 million years ago in East or South Africa, but the remains of their most ancient relatives – sahelanthropes and ororin – were found far north of Chad and Kenya.

Even more ancient remains of primitive primates living on Earth about 15-30 million years ago are found exclusively in the territories of Asia and Europe, which makes many scientists believe that our most ancient direct ancestors could have appeared not in Africa but in the territories of other continents.

Svitman and his colleagues found the first evidence that the most ancient direct ancestors of man really lived in the territory of the future Europe and Asia, studying the samples of rocks that formed on the famous Jurassic coast about 145 million years ago. At the beginning of the Cretaceous, Europe did not exist – it was at the bottom of the Tethys Sea and was a set of islands separated from each other by shallow straits and seas.

The fossils that Svitman and Smith found on the shores of today’s sea, as the scientist remembers, immediately reminded him of the teeth of modern mammals and their primitive relatives who lived at the end of the Cretaceous, and not the oldest warm-blooded creatures, multi-humpbacked mammals, completely extinct with dinosaurs, whose flowering just falls at the beginning of the Cretaceous.

This makes them owners of the oldest “direct” relatives of a person, the existence of which we know today. In addition, two species of animals are claimed for this role, whose remains were found in China – Eomaia scansoria and Juramaia sinensis, but recently paleontologists, as Svitman notes, have doubted that they are the relatives of modern mammals.

Like most mammals of that era, the first of the finds of Sweetman and Smith, named Durlstotherium newmani, a “mammal from Darlestone Bay,” was small in size and fed on insects, crawling out of cover only at night. The second tooth, scientists suppose, belonged to the close relative of this creature, which was called the Durlstodon ensomi.

“These teeth were unusually” advanced “for their time – they could cut the food into pieces, pierce and crush it.The high degree of their wear and tear indicates that their owner has lived to the venerable age. simply, given that the neighbors of these creatures were predatory dinosaurs, “- concludes the scientist.