In Europe it will be a farm of edible insects 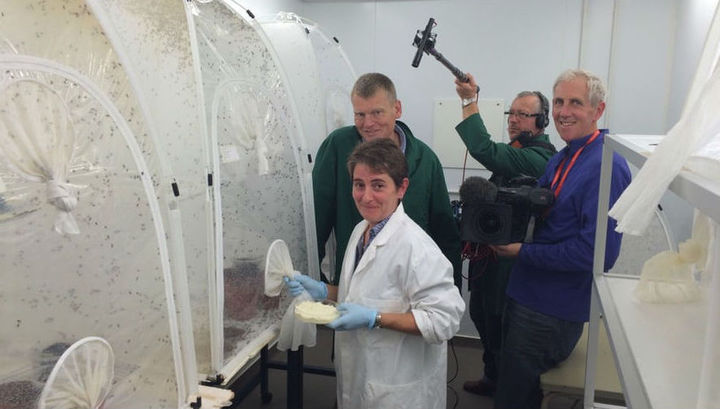 Insects, according to fans of exotic food, very tasty. A few years ago there was a view that the insects could become the source of essential protein that will save people from a potential global shortage of this substance.

Many may argue that insects are not the most pleasant source of nutrients. Is, they can only intrepid travelers who have no other options. But, studies show, the public is quietly refers to the idea that insects will become food for livestock. In the end, many people who spend summer in the villages know that the chickens dig in the dirt, in search of a favorite delicacy of earthworms. All eat chicken and confuses nobody, what she ate for his lunch. Furthermore, village poultry are considered the most tasty.

Representatives of the European Union look to the future and already thinking about how they will feed their citizens in 30-50-100 years. Considered including the prospect of establishing farms for growing insects for feed production.

In the future it is expected to increase the human demand for meat, say representatives of the Food and agriculture organization of the United Nations. In this connection it is necessary to look for new protein sources for animal feed.

The acreage is limited, and currently demonstrates only moderate growth of the crop, despite numerous efforts of various agricultural companies. Farming insects as a protein source for livestock will free up land needed for growing crops direct for human food.

Recently, the European food safety Agency food safety authority (EFSA) showed that the main objection to breeding insects as food and feed for livestock has no basis. (However, while this is not a final decision.)

Explain. There are a number of problems associated with the cultivation of edible insects. In addition, there is a ban on breeding insects as kolmikulma, as there are certain chemical and biological risks. In this regard, the EFSA researchers in the preparation of the report on this issue has examined the data from various research studies conducted by scientists from France, the Netherlands and Belgium. The Agency’s experts were going to create a so-called risk profile, identifying the potential biological, chemical and environmental risks associated with breeding insects for agriculture.

So, according to the report, these risks will depend on the manufacturing methods of the substrate (feed for cultivation of insects), the stages of the life cycle of insects, their types and methods further processing.

The report concluded that potential risks from the production, processing and consumption of insects as food source the same as other forms of livestock. Probably comparable and environmental risks.

Of course, there are still many uncertainties related to the consumption of insects by animals, but the experts ‘ report makes it clear that it is not yet enough data to definitively say that all risks are justified and will be easy to resolve.

Currently, the European Commission intends to examine all collected data and EFSA to decide whether to give the project PROteINSECT, the EU-funded, or not. In the framework of the project scientists want to investigate the safety and viability of farming fly larvae as a court for the cattle.

Starting in 2013, specialists of the project PROteINSECT worked with experts from the EU, China and Africa. They studied the effects of the introduction in the diet of chickens, pigs and fish two types of fly larvae. Experts have grown larvae using two different forms of organic waste, fed their livestock and aquaculture and analyzed how secure new sources of food. Currently preparing a report on the work done.

Lack of protein in Europe – a very real risk to social and economic progress, ” says the coordinator of the PROteINSECT project Dr. Elaine Fitches (Elaine Fitches). While we seek solutions, we must consider the number of benefits associated with the introduction of insects such as fly larvae, prey animals. PROteINSECT experts believe that this innovation opens up opportunities for Europe in the provision of agriculture-traditional sources of protein.

It is noted that in addition to maggots experts believe that advantage as feed for animals can bring houseflies, grasshoppers and silkworms.